Aquarium World by Anything Fishy 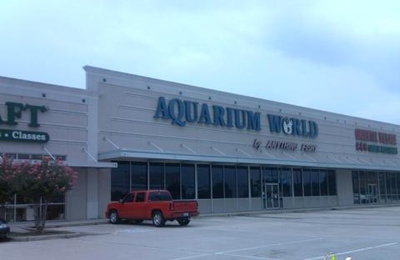 Great selection and healthy fish..most workers have knowledge but others don't..don't like the very high prices

This is by far the best Aquarium store in the greater Houston area. It is worth the drive! The staff is great. Fish are always healthy. The know everything and will explain it in detail repeatedly if necessary (water chemistry is important) They can always help me figure things out and rework them when I want to try something new. Sometimes you really do get what you pay for. Been a customer for years. Appreciate the knowledge and help.

This is a pretty good fish store. They have a lot of variety. Once you have been a few times you realize that they always have the same variety though. It's fun the first couple times... Their prices are a little higher than Petsmart and a lot higher than Walmart on food and supplies. I have bought quite a few fish there. Their fish are not any healthier than Petsmart fish. I think a lot of people assume that they will be since this place specialized in fish. But it's just not the case. They have dead fish and sell sick fish just like any other store. The guys that work the front counter are knowledgable and friendly. Dont mess with the girls that scoop the fish though. They are short tempered and would prefer that you just leave without bothering them.

The bathrooms are pretty gross most of the time, especially the mens. My husband won't go in there anymore. The girls isn't that bad, but how bad is too bad? And is it that hard to clean a one stall bathroom daily?

I was going to give them four stars but after reading my own post here I dropped it to three. Four because of selection, but dropping to three because honestly the place sorta sucks.

They had their great big thousands of gallons tank rebuilt a few years ago, it's cool, but filled with tiny fish. I miss the big monster fish that were in there before.

The fish gallery used to be the prefered place to go buy all sorts fish, but since they moved I think they don't carry as much as they used to, plus they are a little pricey. But they know everything and are always willing to give advice and help.

My husband and I went to aquarium world the other day, and the staff don't even know what they are doing. The staff was being very rude, and handled the fish that we were buying very rough! One of our delicate angler fish died because of there staff. Thinking, that talking to the manager would help, but we were wrong about that. We took our dead fish back and they asked for a sample of water from our tank. They just gave me a piece of paper that they wrote on saying that my water was super bad, and that's why my angler died. They would not show us the water test and turned us away with no care in the world. We get treated at petco then this place, and will never come back

This store has everythingl awesome selection of fish and everything else! Their biggest downfall in my opinion, is their prices. Their plant prices and along with a few other things seem a bit over priced.

What I really like about this place is that all sorts of fish, many that I would consider a bit hard to find!

This place had a waterfall goldfish pond and saltwater stream that wrapped around. There was even a playhouse for the little kids. They were building a huge viewing area for fish also. They had tons of fish that I have never seen, especially the salt water fish. The selection is tops. They have a system that records what you buy, so you don't forget that filter model. The amount of inventory is incredible, like 20 types of simple items like air pumps.

The price is unbearable for everything, so it's best to find what you want and call your local tropical fish dealer to buy.(ex. neon tetra $2.99, .68$ at my local dealer) They had unique aquariums in the thousands. One staff member would say ""that will eat your fish"", the other would say it wouldn't. There did seem to see one or two die hard fish fans as staff with the rest being college students.

This place is a great Sunday stroll and definitely a must see for any fish lover. Just keep your money.