SAVE 50% ON SUNDAY NIGHTS 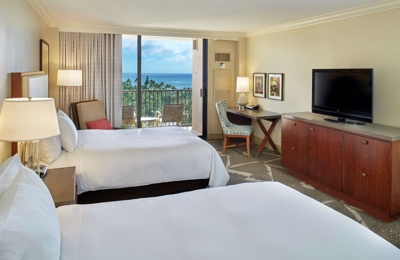 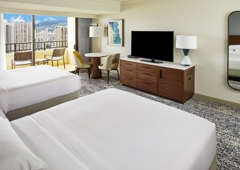 This is a massive resort (good for conferences, business trips, etc), but it's also really nice and I never felt like it was too crowded with people. The location can't be beat ... you're right on Waikiki beach. Stunning.

My husband and I took our family on our first trip to Hawaii a few months ago. We also took my mom and grandmother. The check in process was easy and the staff was great. Because we were traveling with kids they have us a bigger room. The view out the lobby is straight to a gorgeous oil and father to the ocean. It was in walking distance to loss of shops and food places. As a first trip for my family this hotel was the best choice.

Love it here. The beach is clean as it can be and the resort is amazing. There are many restaurants with a variety of options. The rooms were well taken care of and real clean. I'll be back

It's a great hotel but if any of you are looking to save some $$ then book it at referer.us/8/GoodHotelDeals They usually have some pretty good deals on there!

We spent 7 days at the resort and loved every minute of it. This is the best place to be in Waikiki. It sits ocean front on the widest stretch of beach in Waikiki. We love Waikiki with all of its excitement and cool flavor. This resort is on 22 acres and has large grass lawns, wildlife, even a pond of penguins. They have 5 swimming pools including one with a trippy 77 foot slide. The kids spent most of the day at the Paradise Pool and the Super Pool. We enjoyed dinners at the Tropics Bar and Grill and went to the Luau (located right there at the resort).
I loved waking up every morning to the beauty of the beach. All of the towers have lovely ocean views but the Alii Tower and the Rainbow Tower are the ones right on the beach. We stayed in a deluxe ocean front room at the Rainbow Tower. The views are to die for. I could not take my eyes off of Diamond Head and the beautiful blue Pacific Ocean.
Our housekeeper was very sweet and accommodating. The employees are generally happy and seem like they love working there.
This is the only resort in Waikiki. There is no other place to stay except the beautiful Hilton Hawaiian Village.

My husband and two daughters love this resort so much. We came on a Friday afternoon and got to enjoy the Friday night fireworks at the resort. They have this very nice hula show that only costs $20 and you get one drink. The show is at the Super Pool and is about 45 minutes long. It ends with the song, Somewhere over the Rainbow by that beautiful Hawaiian singer named IZ. Then the fireworks go off right over your head. It seems really close. Tons of people come out to see it and we were so fortunate that it is right there at the resort.
This is great place to be. We have stayed at the Sheraton Waikiki and other places in Waikiki but we will never stay anywhere else except the HIlton Hawaiian Village. We just loved the Luau at the resort, The Waikiki Starlight Luau. The entertainment and the dancers are so much better than any other we have been to. Any other luau on the island takes several hours to get to. This luau is right at the Hilton and so we still had time to relax at the resort and go for a night swim at the pool. The resort has 5 swimming pools.
The place is huge, more than 20 acres of beautiful grounds.
The price of food was okay. They have a lot to choose from, with over 18 restaurants and bars. It was fun to stay on property to eat but also fun to walk into the heart of Waikiki.
We loved walking around Waikiki but were always so glad to return to the safety and beauty of our Hilton Hawaiian Village.

We love Waikiki and won't stay any where else except the Hilton Hawaiian Village. There is not another hotel that is better to stay at. I read many reviews of this place and I cannot believe it when I hear negative reviews. How could anyone not have a nice stay at Hilton Hawaiian Village. There are beautiful koi ponds, large grass parks, a huge calm lagoon and lots of swimming pools and water slides.
The beach fronting the resort is the largest and widest beach on the Waikiki shoreline. You can look at the google earth map of Waikiki and you can see how large the beach is in front of this resort compared to any other hotel on the beach.
Let me give you some tips about this place. If you have kids, you must sign them up for a day at Camp Penguin. Kids love it and will enjoy learning about Hawaii and exploring the 22 acre resort. You also have to have a dinner at Bali Steak and Seafood. The food is to die for and the ocean front views are so calming. You also need to go see Erol at the Lagoon at get a stand up paddle board lesson. Erol is very handsome and very Hawaiian. He has green eyes and a great physique. The girls love him.
The best thing to do is to get an ocean front room at the resort. You will love the ocean front rooms at the Rainbow Tower. Those rooms will be even better in 2011 when they get renovated. We love them even in their current state. They are very nice. We also enjoyed our room at the Tapa Tower and hope to next time try out the Alii Tower. I heard the Diamond Head Tower was older but the rooms were large. Still, I think you would love the ocean front rooms.
You can find all kinds of restaurants at the resort or go for a walk down Kalakaua Avenue and find lots of other choices including Cheesecake Factory. We spent one day and night at the Ala Moana Shopping Center. It truly is a great outdoor shopping Mall with so m uch to see and buy. They have a cool bar called the Mai Tai bar with beautiful music and really cute waitresses.

Dont Come Here!
I've been to Hawaii a total of 10 times over the past 20 years, and this place is by far the worst place I've ever been to--anywhere.
This place is awful. First, it is 5 huge towers. Only one is on the beach. They claim to have ""ocean views"", but you really have views of other towers. If you stick your neck out far enough from the balcony, you get a glimmer of the ocean. The four towers completely shadow the pool
The service is arrogant. The hostess in the restaurants couldn't care less if you are there. The beach attendants are worse. I asked for a beach towel and the attendent wouldn't give it to me, claiming they weren't open yet (even though the towels were there, attendants were there, and it was nearly 9 AM, when they are supposed to open at 8:30; the attendant told me they were on ""Hilton time"", which meant that they would open when they felt like it).

I went to the men?s room one afternoon and the Janitor was in there cleaning. After washing my hands, I noticed that there weren't any hand towels. I asked him for some, and he told me ""they were out"". This is a 2000 room hotel and they are out of hand towels?

I called up house keeping to send me some pillows, and it took 3 hours. They arrived at midnight, after I was asleep for an hour.

I put a ""do not disturb"" sign on my door, and so, they called my telephone to ask if they can come in (after all---they wouldn't want to ""knock"" on my door, since I had the sign up! Instead, they figured that they could telephone me and that somehow wouldn't ""disturb"" me!)

I get the impression that the employees truly don't care about working there. They have no pride in their work whatsoever.
The location doesn't help. The hotel is near downtown Waikiki and the traffic in and around the place is awful. It takes 30 minutes to get away from the hotel to drive anywhere.

Unless you have a strong desire to spend a lot of money and get frustrated, I'd recommend staying away from this place.

this place had an awesome buffet. everything was great. didn't taste like buffet food. awesome view!

First off..I didn't pay for this trip! But if I had the money I'd go back time and again. The rooms had wonderful balconies overlooking the water, the ambiance and attention to detail was amazing. I wish I were rich...

Take a 15min walk or hop on the Pink Line Trolley to go to the Ala Moana Shopping Center - reasonably-priced & tasty dishes at the Food Court!

We stayed in a 1 bedroom ocean front suite and couldnt have been more pleased with the room. The staff were helpful and always willing to do anything and everything to make things more pleasant and easier on us. The shops, though some were expensive, had alot of interesting items and had about everything you would need. We didnt eat here much ,so cant really say alot about the dining prices, but Round Table Pizza was the best pizza ever, and the ice cream shop was Heaven!! There is so much to see and do on the property that we could have spent the whole 2 weeks just looking around at the hotel! If you're up early enough the beach is almost completely empty and the temp. is low. We spent our mornings and evenings alone walking on the beach. We couldn't have chosen a more wonderful place to stay.

Very disappointing experience. We were so excited to finally stay at a Hilton hotel and we had saved for almost 2 years for this trip. The property is beautiful, well maintained and practically a shopping destination itself. However, every single amenity was at an added cost. These were outrageously expensive! From dinner in the restaurants to water in the room. The concierge and bellmen were helpful and friendly. The rest of the staff was not (we seemed to be in their way as if they had something better to do). The friendly inviting people of Hawaii made us feel welcome once we left the Hilton Village. It is a shame the Hilton doesn't incorporate a bit of this Aloha feeling.

While there are a lot of better places to be in Hawaii than Honolulu, if you're going to be in Honolulu, then the Hilton Hawaiian Village is a great choice. As long as you're on the grounds, you feel like you're in a resort paradise. Yes -- pretty crowded with buildings; NOT a natural resort. But if you want good food, lots of pools, the beach, shopping, massage, and nice rooms, this is a great pick. The kids will have a great time too. And the submarine ride just off the beach is fun. Nothing much to see while Snorkeling on Waikiki (a ""dead reef"") -- you'll have to drive 45 minutes to Hanauma(?) Bay for that.

Imperial Hawaii Resort at Waikiki The