You can count on us for professional septic service

You can count on us for professional septic service

General Info
Arthur Price Septic Service is here to help you. Our Technicians are qualified and experienced to solve any problem you may have. Our trained staff understand your concerns and can handle all every aspect of the job for you. We are licensed and insured for your protection. We pride ourselves in being helpful and offering personal service and quality work at a reasonable price. We have a wide range of detailed services therefore it is imperative that you work with a company that you trust, that is licensed, fully insured, knowledgeable and experienced. Arthur Price Septic Service has years of experience, education and training that works with local municipalities, private utilities, shopping centers, restaurants, extended care facilities, hospitals, hotels, community management companies and private homeowners. Arthur Price is central Florida's most experienced septic system company, serving Pasco, Hernando, Hillsborough, and Pinellas. Call us today.
BBB Rating
A+
BBB Rating and Accreditation information may be delayed up to a week.
Hours
Regular Hours
Extra Phones 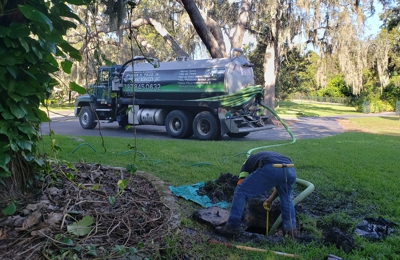 Arthur Price Septic has been servicing our septic tank system for over 15 years, they do a great job each time and give advise how to care for system.

Great experience (considering it was septic related :)). Prompt, informed, timely and courteous. Our inspector was Joe and he was great!

Had Price Septic come out to my house a couple months ago to pump tank. Tech said didn't need pumped that line needed to be jetted out for 135.00. A couple weeks later the same problem was happening. Tech came out to re-jet the line. Tech used my garden hose ( not his power jet ) and pumped the tank out this time for additional 200.00. About three weeks later, the problem was back. Tech came out, said he could see some water flowing through pipe into tank, offered to jet it out again for the bargain - basement price of just 85.00 instead of 135.00. Tech also told me that inlet and outlet pipes were in the wrong place and that that was my problem. Although, it had been working fine for three years since the new drain fields were put in.

Bottom line, obviously Price doesn't stand behind their work very well. There's something wrong when you expect me to pay for something again because it wasn't done right the first time.

I would not recommend them to a friend.