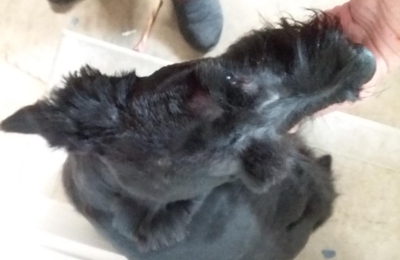 Shorty was a nervous wreck when I picked him up, and she says he bit her. He has NEVER EVER shown any aggression and has been very docile for a terrier. She was alone in the shop this day, and it makes me wonder what provoked him to bite, if he did so. He was a nervous wreck on the way home, and when I went to strap him in the car, he acted like he thought I was going to hit him, and kept cowering terribly! Something happened out of the ordinary 4 days ago now, something was just not right, I can not help but to wonder., The tone in her voice when she screamed at another dog to "SHUT UP" while I was there, also made me wonder, if she talks to them and screams at them like this, with me standing there, what does she do when no one is around!? The first time I took Shorty there a few weeks back, he did fine, but there were other staff members there, and he was happy when I picked him up. She also did a terrible job of grooming. I explained to keep the tail and not cut it down, She cut a ring around the base of the tail even after me specifically telling her to NOT CUT THE TAIL!!!! WHO CUTS A RING AROUND THE BASE OF A SCOTTIE TAIL.!!!,,,he is not a poodle! She did not cut the hair out of his ears, or clean them as I ask, his head is all scuffed up with razor burns, to where she had the clippers too low, even cut in a streak in his face (nose), and around his eyes, but what is most important is his treatment while there that I wonder about. Though the hair on the scuffed up face and head will grow back , I can only hope that whatever happened there will not haunt him, as that could last a lifetime. I called her and told her how disappointed I was in the cut, and of his reaction, and that I would like to email to her these photos. I emailed her 4 days ago, sent photos and told her that I would possibly post this review, sent a second email asking her to respond, and a third, then a 4th, along with a voice mail. To this date, she has not responded, not so much as an apology.

My little Yorkie has such a high anxiety level that I am always so worried about taking him to any groomer or vet. At Black Ties and Tails I never worry a bit. She is so good with him he never even barks when I leave. He always looks so handsome when I pick him up I wouldn't use anyone else for my little man.

My dogs have never been treated this special. They were absolutely BEAUTIFUL!!!! I could not believe how calm they were when I picked them up. They made no attempt to jump out of Debbie's arms to get to me, their little hearts were not pounding, they were as calm as when I left them with her. I could not believe the difference in their behavor and how their coat looked like cotton candy. It was an amazing visit and I will be recommending Black Tie & Tails to all of my friends. Thank you Debbie, for taking such good care of our babies. See you again, soon!

they do a great job, not overpriced. the dogs come home happy and calm, not traumatized as some dogs can be at the groomers.