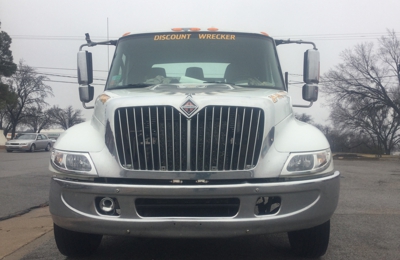 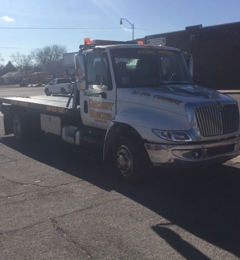 Pretty much anytime you need a tow truck, it's a stressful time. For me it was especially so since my car broke down on an interstate during a torrential downpour in a state where I don't know anyone. To my great fortune, Jim from Discount Wrecker is the tow truck driver that my insurance company sent to me. Not only was he extremely competent at his job, but he made me feel much more relaxed despite the high stress of the situation. He even had me laughing while he worked. He took my car to a very good mechanic and even came back to check on me when he completed another call. It was decided that my car needed to go to the dealer which was located an hour away. Although Jim had been working since the previous evening and it was now close to noon and it would've been much easier for him to only take local calls, he offered to get my car where it needed to go. Jim made me feel like I was one of his neighbors and friends instead of a complete stranger from out of state. He made an incredibly stressful day seem fun - just by being who he is. I can't say enough good things about him and would recommend him without hesitation. He does a great job, has great prices ... but most of all - he actually cares about the people who he services. Thanks again for EVERYTHING Jim!

They are life savers!!! I am a 19 year old girl who was driving to Tulsa and got stranded around 11 at night, about an hour away. I was scared to drive with a stranger but Jim the driver (I think that's what his name was) really did a great job of making me feel safe and comfortable. He also did a great job towing my car at a VERY reasonable price. YOU GO JIM!

My son was broke down last night and i looked up tow trucks and this guy came up. We called and he was very reasonable on his prices and got my boy and his truck home safe. Thank you so much.HIGHLY RECOMMEND....