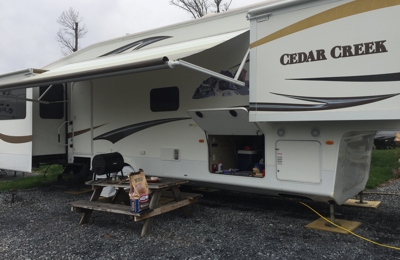 sales staff no complaints however there service dept. stinks bought camper in december parked it in driveway in march getting ready to go camping lift jack doesn,t work got no help from service dept at all made to feel like were pulling a fast one took several emails to co. hq to get action .This was our first RV trust me you don,t want that kind of stress

Purchased a used RV. They failed to disclose it had a hole in the roof. Now they will not answer the phone or return phone calls. They people are highly unprofessional scum. Totally untrustworthy.

These are bad people. They sold me defective boat and they won't stand behind it. They do not know what they are doing. Do yourself a favor, go somewhere else.

Do not buy anything from boat n rv! Worst experience of my life! Bought a new camper and had nothing but problems! I didn't chose to buy a used one so I wouldn't have problems. First trip the air conditioning wasn't working, the it leaked plus it leaked by the shower. And it is back again because water came in again. Left several messages for service and no call back. Wanted to speak with manager but of course he was busy. Just want my money back!

We bought a new C class at an rv show . We were very excited , however from that point foward very disappointed . We asked them to not show the rv but they continued to do that and then took it to another rv show before we could take delivery. Upon delivery the person explaining how to with all the features even told us he had no idea how to use most of these features . We were told we would receive the second set of keys but were then told they had no idea anything about that , eventhough we had it in writing . Over all I would give this place and the staff less then one star if I could . People please beware !!!!!! Some shady stuff happens with this business !!!

Great buying experience. These guys were great and answered all of my questions. They made the whole process really easy!

Service is deplorable. We have been lied to about our rig being fixed several times. Our rig has been there for 12 weeks. They have cashed the insurance check but not fixed the rig. No one has followed up with the manufacturer of our rig for possible warranty problem. There has been 4 service managers in 12 weeks. No one returns calls or contacts our insurance at this point. If there was a negative rating, they would get it.

I had a very good buying experience.

Everyone was very helpful.

Great job by everyone for my purchase.

Very friendly and accomodating of our needs.

Bought my last RV with them and was very happy.

Excellent demo given of the RV.

It has been a great experience dealing with the tech.

They did a really great job.

We like the great selection of RVs and everyone was very nice.