Save Money with Our Mill Direct Pricing!

General Info
Please Visit Our Web Site for Additional Information
BBB Rating
A+
BBB Rating and Accreditation information may be delayed up to a week.
BBB Accredited businesses follow the BBB Code of Business Practices and pay a fee for accreditation review and monitoring. Accreditation is not a BBB endorsement or evaluation of the business’ product quality or competency in performing services. 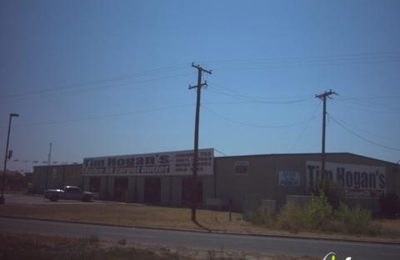 Our experience with Tim Hogan's was 1st class from beginning to end. We were walked through the entire flooring process with confidence and creativity. Not knowing exactly the specifics of what we wanted was a bit unsettling given the project. Sam D. carefully listened to our vision, offered suggestions, and from there a superior product was delivered ahead of schedule. I should also add that they are competitively priced. They have our repeat business!

We have used Tim Hogan's Carpet Outlet for over 20 years now. They have done an excellent job on all of our home carpeting and flooring, they have done kitchen floors in our rental properties, and replaced flooring and carpet at our law office. Every job has been done quickly, perfectly, and their teams are always fabulous. Very friendly and they have always gone the extra mile for us. The price has always been great but we would never consider using anyone else at any price. They are the BEST!

This place was recommended by a contractor, who's work ended up being as bad as the service from Tim Hogans, but I ordered carpet there because I needed it quickly and didn't have time to shop around. Luckily we ordered top of the line carpet with 25 year warranties on everything including a 30 day money back quality assurance guarantee.

Once the carpet was installed we called to tell them that we did not think the correct padding was used because it felt like we were walking on the cement floor. After spending two weeks trying to get someone to come out and check the installation, I was told that they would not be sending anyone because no other customer had ever complained about this carpet before. I was told my only recourse was to have the carpet ripped out within the 30 day grace period and pay a second install charge to get new carpet put in.

I was finally able to get an employee from the Grapevine store to come check the pad a week later who confirmed that an inferior pad had in fact been installed. After spending 20 minutes arguing with the owner of the company who offered nothing for the time and frustration I had been put through, I finally told him to credit me the full amount of my purchase and come take the carpet out.

In the end, I went with another carpet company and Tim Hogans lost money on the sale, the installers who were paid to put it in and take it out and the carpet that was probably trashed. They also lost a good paying customer who will go out of her way to tell others to steer clear of this truly bad business.

We had all flooring replaced and were very pleased with the service we received from Tim Hogan's Carpet Outlet.

The installation crew was excellent - exacting, careful and neat. The seaming of the carpet and the vinyl was very good. They really made an effort to please us and I would certainly recommend them.

just like the other four star reviews here, i have had nothing but good luck with Tim Hogans carpets. my wood i had installed several years ago still looks like new and the carpet i recently priced was fair and included everything- no extras. the installers worked quickly and quietly and left no mess. they will be doing my job this spring for sure. nice to be able to do business with a reliable company.

I used to be a manufacturer's rep in the commercial carpet industry (for 14 years), so I know flooring! And I can't recommend Tim Hogan's Carpets highly enough. Would give them 10 stars if that option were available!

They have installed both carpet and wood floors in my home. The carpet I purchased has been amazing. Still looks new after a couple of years now. And the wood floor is just beautiful & perfectly installed, over a slab that was not exactly an ideal surface to work with.

They are very competitively priced, and offer top-notch product lines.

Their installation crews are the most meticulous I have ever seen. They take the time to be sure that the installation is absolutely perfect.

I can't speak highly enough about this company, and would not even consider using anyone else for my flooring needs. They have a customer for life with me.

We would like to take this opportunity to express our appreciation to your company for the professional services we received when we purchased new carpet and tile for our home in November 2010.

Your sales representative, Dan Felland, was very knowledgeable about all of the products we considered and gave us expert guidance throughout the entire experience. While we probably took more than the average amount of time to make our selections, Dan was patient and quickly learned our preferences. We appreciated his assistance and his insight and have given your company and his name to several of our acquaintances.

We were also thoroughly impressed with the installation team, who arrived when expected and worked hard over a two-day period. Andreas and Silvano were skilled craftsmen who also took great care of our furniture and our hardwood floors. They are some of the best contractors we have experienced and we hope that you continue to utilize their services.

Your company practices exemplify that one sale is not the primary goal of your business. It is more important for the customer to know they have experienced good value for their money to such an extent that it results in referrals to family and friends as well as return business when the need exists again.