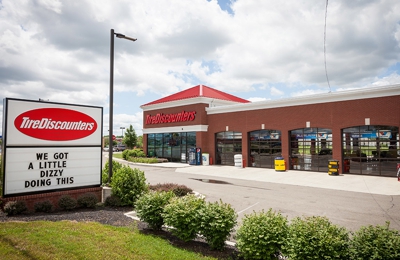 Excellent customer service. They bent over backwards to make sure I was satisfied with the work completed.

They are holding my son's Venture Van hostage right now. It was brought in last week for what we thought was a battery issue, they said it was a wiring harness issue and they ordered the harness. A few days later when it was "ready" it was brought home and parked in the driveway. The next morning my son opened the door to try to drive to school and the Van STARTED BY ITSELF, NO KEY IN THE IGNITION FOLKS!! Then WOULDN'T SHUT OFF! Obviously IT WAS WIRED INCORRECTLY BY TIRE DISCOUNTERS. SO,had to drive him to school in another vehicle, then, back to the shop it went. NOW, THEY WANT MORE MONEY, TO FIX WHAT THEY WIRED WRONG! They state that WE messed it up! They won't even own their mistake! They are holding my son's daily transportattion for hostage until they get paid , yes folks, for what their INCOMEPETENT TECHNICIAN DID WRONG! I have worked in the automotive industry for 14 years. At the dealerships I worked at, if you messed it up, you fix it. Don't charge the cusomer and expect to be paid for your technician's mistakes. This particular Tire Discounter location has done work on the van before and would have been brought back if not for this unbelievable work ethic they have. I am going to do all in my power to spread the word so that they can't do this to anyone else. Next step the BBB. MY SON NOW HAS NO TRANSPORTATION ,this incident has caused us all stress and much inconvienience of having to drive him to school and pick him up and keeping us from our work and could cause us our own jobs. This location is doing BAD BUSINESS! I pray they do the right thing and get the van fixed properly and safe for my son, by god, and release it without any further charges.