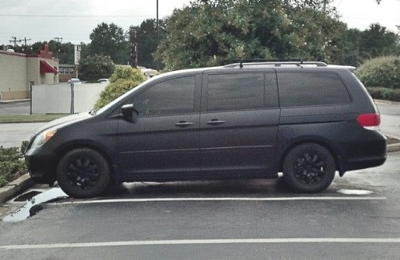 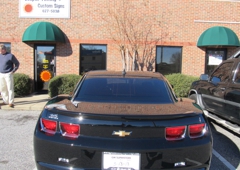 Chris at Eclipse Window Tinting of Greenville is a 1st class Master Tinter. I have him do all of my projects. He always makes it look easy, is very professional, and quick to accomplish the work. Two thumbs up!

Eclipse tinting has tinted 4 cars and 2 trucks for my bus.
they have allways done a great job.

I have had my last two vehicles and my moms last vehicle tinted here. The service was friendly and quick with quality work. Pricing is great and i have not had any issues at all. I recommend this place to everyone i talk to that wants their car tinted.

They did a great job on my ride. Being new to the Upstate, I started asking around who tints windows. Like everybody said Eclipse. I very satisfied.

Hands down, Eclipse is the most trusted name in town!

ago.. Got a new 5 series, they installed a Ceramic Film, they explained

simply as, you dont have to go with a

even posted a picture on Facebook.com/upstatetinting

I have had a lot of cars tinted threw the years, seen places come and go. It's good to see a small bus. that has not only survived the turbulant economic times but strived to be better. Highly consider getting your windows tinted here..best in the upstate.

I had Eclipse tint the windows on my Acura, I love the tint! Would highly recommend !!!

Terrible work, refuses to correct bubbles and creases in the tint. Don't be fooled by the photos taken 30 feet away - those don't show the defects. Basically flies through it as fast as possible to get as many tints done as possible in one day. If you want quality, go elsewhere.

Bad tint work. Very dodgy when asked to correct work. Set up an appointment to have it fixed (bubbles & creases), but he never showed up. Doesn't return voice mails. Came to the shop un-announced, he initially refused to repair the work, then wanted to charge me $50 extra to fix. Filing a small claims case to handle this - worth it just on principle. Go elsewhere if you care about your car.

Very impressed by the level of service and quality of product..Been 2 weeks since they

tinted my Camaro..looks great..will refer all my friends to eclipse tinting...

Eclipse Tinting tinted my new 6 Series BMW over the Holidays. Been about 3 weeks Tint looks great, no bubbles.
Will for sure be back and tell any one the best place to go.

Eclipse Tinting Tinted the windows on my new 6 series over the Holiday. Tint looks great, no bubbles will for sure be back and tell any one that asks. Thanks

This was an ordeal. The side window tint wasn't taken far enough below the inside trim, so rolling the windows down peeled it back off. Also the rear window came out with bubbles all over. I was told those bubbles would go down in a week and I could bring it back if it didn't. We'll, called several times, he wouldn't answer or return phone calls. We finally agreed on a time, showed up, he wasn't there. Around and around it went. Finally, when he was there ( I showned up unannounced), he said, "well, I'll have to charge you for the material to redo it". What a load of BS. I went somewhere else to have it taken off and redone. The rework by the other company was very good, been there several weeks and no issues. If you want quality, don't come to Eclipse Tinting.

This is the 7 the car eclipse has tinted for me and my family. we have allways been satisfied. very friendly and stand behind his work. would recomend to anyone with a fine auto. who want a great tint job.

had my new TL tinted on march 22nd.

Took our SUV today and had four windows plus two small windows tinted. Chris was very professional and did an awesome job. Our vehicle looks even better with the tinted windows. Not sure why all the negative reviews, but we are very satisfied with the whole process, from the comfortable waiting room to the end result. Well worth the money and will recommend him to anyone who needs window tinting. It's a shame that people have to be so shallow to post negative and nasty reviews. I will post later to see how everything settles out with the tinting, but so far everything looks great. Thank you Chris!!!

Horrible customer service. Do not have your car tinted here if you like your car!! Nothing but short-cuts and poor quality workmanship. I have returned several times to fix problems with the tint, and nothing has improved.The tint has only been installed for a few weeks and is already starting to peel. Now he will not fix, and will not gaurantee his work. He uses the cheapest product available from his supplier. Pay the extra $50 and go somewhere else that has a national warranty on the film and labor. He seems nice at first until you have a problem with the work, and then its nothing but excuses and even worse repair work. Now I have to pay someone else to peel the tint off, and then pay to have the car re-tinted by a professional. Nothing but headaches and wasted $$