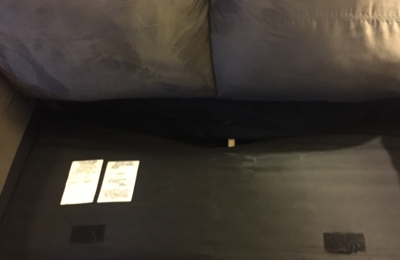 Sold us s couch and love seat, useless extended warranty for stains, too many exclusions to justify extra cost or advises you to buy kids and pets at Walmart, then love seat BROKE 2 yrs after purchase, nothing they can do. A 230 lb man simply sat down on it. Buyer beware.

Had an excellent experience on Sunday @ Van Vreede's. Walked into the store very overwhelmed. Scott Berg approached us and was fantastic. He was very knowledgeable, helpful and put our minds at ease.
Great experience all around.

After spending thousands if dollars on appliances for our newly constructed home, less than a year later with all appliances STILL under warranty we caution all considering purchasing from here to beware. Their service is a joke. We currently have a dishwasher that has required service TWICE in three days. The second time was after it had a severe leak causing $3000+ damage to our flooring and cabinets. Their response? "Call your homeowners and file a claim." THEN, after the second fix--the same day the repair was actually done (we had to wait over a month to actually have the second fix done because of repairs needed to our flooring and cabinets first) the darn thing is broke--again, and it's the exact problem that was "repaired" the first time!We will be calling in the morning and asking for a new machine as it now falls under the lemon law, but we suspect they will try to finagle themselves out of that as well. Their claims of excellent service are nothing but lies.

in March of 2013 my husband and I went to Van Vreede's to look for a new couch. I had never had a brand new couch, always hand me downs, so this was really exciting for me! We went all over the city of Green Bay, ending up at Van Vreede's where we had great service! We found a beautif leather Lane reclining couch which was slightly above our budget. We were assured it was high quality and a great product. Fast forward over 6 weeks and we finally received our couch. Upon arrival we realized that the back panel was scratched and it would need to be replaced. We worked with Van Vreede's to schedule their furniture repair man to come out. They missed their first visit and we needed to reschedule. (Mind you I had to take off of work and it ended up being a pointless use of precious vacation hours!) Upon arrival of the furniture repair man I mentioned that I thought the couch was leaning and the reclining mechanism seemed tough to close. Once inspected he determined that the mechanism would need to be replaced. Instead of replacing the mechanism they ordered us a brand new couch. Later in the year December 2014, our new couch arrived. Now on our second couch, countless hours of vacation hours used for repairs, I was hoping to be happy. This couch was also scratched and the back leather panel had to be repaired once again! There were small scratches all over it! When Van Vreede's came to repair the back of the couch he covered "some" of the scratches with a pen. We had the couch about 5 months when the reclining mechanism started failing on the couch --- AGAIN! I called Van Vreede's to explain what had happened and they told me that this NEW couch was no longer under warranty. Their warranty expires one year after the original purchase date. WHAT??! They sold me not one lemon, but TWO and they would not fix it even though it was not even 6 months old!! They said i could pay to have someone come and take a look at it, but they will not cover the cost. I WILL NOT pay Van Vreede's any more money to come to "See" what was wrong. What then? Then I will need to pay even more money to "try" to fix it. I find their customer service awful. I asked to speak with a manager and the response that I received was "I am the manager," and that is as far as i could go. I am 29 years old, I have plenty of large, house hold purchases to make in my future. I will NEVER go back to Van Vreede's nor will i EVER recommend them to anyone.

Purchased $1500 leather love seat which I was told was "leather everywhere you touch". So I bought the $200 warranty, turns out three years later the salesperson lied, the main center seam is vinyl, it is tearing, and the warranty won't cover it nor will this company back their products, or their dishonest salespeople. And apparently $1500 love seats are their "introductory line"

We bought KitchenAid appliances: stove, microwave, dishwasher, fridge, and washer/dryer...all stainless steel, high level models and spent lots of $$. After several months our fridge stopped working...didn't keep things cold, we lost lots of food because this expensive fridge didn't keep our food cold. We had several service men come and finally they said it was junk and needed to be replaced. VanVreedes pretty much washed their hands of the entire ordeal. My husband has spent hours on the phone with KitchenAid and finally got them to agree that their fridge was a lemon. Now, months later we are still waiting for a fridge...KitchenAid promises to send out a new one, but we are still waiting. Spoke to the manager and pretty much agreed that after they get their money, they have NO involvement with service issues. What kind of business is run like that. For sure, Van Vreedes WILL get LOTS of AWFUL reviews when our friends ask about appliances. We have already told many to STAY AWAY. Horribly run business!!! Wish I could give a negative rating...

I've bought several things from Van Vreedes over the years, but never again. We purchased a new washer and dryer set and I have not been happy with them. It is just under 2 months since the set was installed. I have experimented with the set, trying to get the correct performance, but cannot. I called Van Vreedes and the manager didn't care. He said that it is past 30 days and he refuses to do anything. So even though we have been long-standing customers and have repeated purchases, they refuse to take this washer/dryer set back. I even agreed to purchase a different set, but no. I will never shop at Van Vreede's again!

We got a great price on a great product and great service! We always shop here for our appliances.

Debbie our salesperson was really friendly & knowledgable. She helped us pick out the perfect furniture set within our budget and of the highest quality.

Our sales lady Barb was so helpful and did her best to give us a t price. She was very knowledgeable and friendly. We appreciated the excellent service we received at Van Vreede's.

Apparantly Van Vreedees does not need repeat customers or value word of mouth advertising at all. After the sale the customer service is absolutely terrible. They do not take responsibility for the quality of the product or the quality of service. They would not appologize for numerous poor customer service experiences with the extended warranty service provider, or with Van Vreedes sales and customer service until asked to appologize. Most of the many people I spoke with were routinely very rude and unproffesional. My husband and I would never purchase another appliance from Van Vreedes. We take every opportunity to advise our friends and family to purchase elsewhere when we hear that they are shopping for an appliance. Their service providers and VanVreedes employees routinely insinuate that we are the cause of the problems with our appliances. Even if that were so, which it is not, customers, even if they are rude, which we were not, should never be spoken to in the way that they speak to their customers. Perhaps the root of the problems are policy/beurocracy, but they are exacerbated by continual misconduct. I would not want anyone to go through what we have been through with this company.

Mike R. was very helpful. I looked here and then left. I looked around at different store. He was the most helpful and the kindest salesman. I cam back and bought my TV here. He even matched Best Buy's deal and threw in the 3D glasses.

Mike was very helpful. He Had knowledge of the T.V.s that was very impressive. Great salesman. I would come back and work with him again. I will also recommend to others.

Very unprofessional and rude employees. Had 1 experience with this business and it will be my only experience with them. I regret even making a purchase from them. The first sales person I worked with spoke to me like I was stupid when I asked questions about things I learned from a different sale at a different business. He continued to not only belittle me but also the other business caused me to ask those questions. Unprofessional! That was not the end of it. After waiting for an extensive period of time to receive my products (longer than I was told the wait would be), I had to deal with an extremely rude warehouse manager. He yelled and had no customer service manners at all. Van Vreedes' employees must all be rejects that better businesses would not hire or tolerate. One would think a family-owned business may offer more but in this case, they are a disgrace. Service is outsourced (one of my products was defective from the start) and Van Vreedes wants nothing to do with service. It shows with the unprofessionalism and rudeness I received. Be very aware. Don't let community voting or the term 'family' fool you into thinking they are something better.

Would give this business 0 (zero) stars but this site requires at least 1.

Donna was awesome! She was a wonderful, enjoyable salesperson! We had a great time picking out our furniture and received the best deal possible. :) We'll be back for years!

Again - great service friendly - helpful. No need to go anywhere else - just bought all new living room furniture - love it. Thanks Mark for being so helpful. Go Pack!!

I purchased a new Sony XBR-55HX959 television and a Bose Cinemate sound system from Van Vreede's. The tv and sound system are fabulous, and so was the service! When the guys came to deliver it, they were running a little bit later than they were expecting, but made sure to call me and let me know plenty of time in advance. When they got here, they hooked everything up for me, including my VCR, and DVD player that I had previously owned, and they made sure each piece was working properly. Unfortunately, things were not working properly with my cable box. The guys stayed her til almost 7:00pm, talking to my cable company because they didn't want to leave without everything working perfectly! They didn't leave until it was determined that a tech from the cable company would have to come out to fix the issue! ... and then to top it off, the next day, Mike, the salesman who sold me the TV even called to make sure that everything was working properly, to make sure that no more needed to be done for me. That's great service! Thanks Van Vreedes! :)