Loden Vision Centers has not yet specified accepted insurance plans.

Loden Vision Centers has not yet specified any specialties.

Call today to for an appointment! 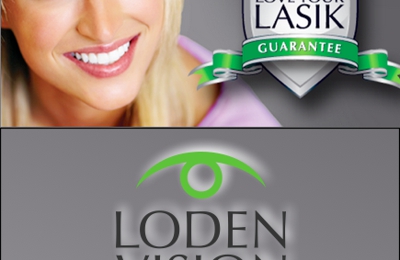 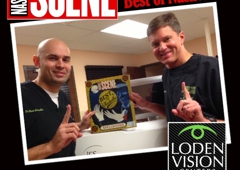 I had my Lasik surgery 5/11/2017 and this was absolutely the best experience ever. I was nervous but there was no reason to be! They treat you like you're family and they take care of you every step of the way. They're so quick and efficient and they make sure you're comfortable. Dr. Loden talks you through every step of the procedure and you don't even feel as though you're having something done on your eye! I've had terrible vision since the 2nd grade and never thought I'd see clearly without glasses. The moment I sat up on the table after my procedure I could see clear as day. I still can not wrap my mind around the fact that I am seeing 20/20 without my glasses. Dr. Loden is amazing at what he does!

After being turned down by other doctors to have LASIK due to dry eyes, Dr. Loden took the time to heal my eyes so that I could then have it. It has been a life changing experience for me. I couldn't see ANYTHING without my glasses and I read 20/20 the day after my surgery. I highly recommend this doctor. The staff will make you feel at ease and the procedure is easy!

I had lasik with Loden Vision Centers a few years ago and loved my experience with them!! They were very nice and helped easy my worries and concerns about the surgery!! I'm so glad that I did have the surgery! Even after a few years it's still like I just had it done!! They were great! Definitely recommend going to see them!

My experience with Loden Vision Center has been beyond negative. I had an appointment with Dr. Mills. Instead of being seen by Dr. Mills, I was seen by her student for an unsupervised exam. After the exam, I had a horrible eye infection. The glasses and contacts I ordered were incorrect. Loden did bring me in for further testing and said I did not need to check with my insurance. They then claimed my eye problem wasn't their fault and sent me a bill for the tests. They also made a mistake with my $600 bill in the optical department, and two months later sent me another $105 bill in the mail. However, the $35 they accidently charged me for a copay they plan on keeping. A mistake on their part is not my financial responsibility. With their reasoning, a store can later bill a higher price for a product already purchased. I think not! Perhaps they are wonderful for LASIK, but I do not recommend them for glasses and contacts. They have wasted my time and money, and I am left with an eye infection that impedes my vision. Very disappointed!

Loden Vision Centers was helpful, courteous, and professional throughout my LASIK procedures. The staff was encouraging and eased my nerves about the procedure. My eyes are great now. I am no longer wearing glasses and I owe it all to Loden Vision Centers and their staff. I highly recommend Loden Vision to anyone seeking LASIK surgery.

Wish I would have had LASIK sooner!! My vision is awesome! I have worn glasse and contacts since I was 16, not anymore!!

I love Loden Vision Center! I had LASIK eye surgery in May of 2012, and it was the best decision! I had worn contacts and glasses basically my entire life. The sugery was very easy and not painful, and the staff puts your mind at ease before the procedure. I was told that I may never have 20/20 vision, because my eyes were so bad to begin with. However, when I went to my follow-up appointment the morning after surgery, I was already seeing 20/20! I'm thankful to Loden Vision Center, and I would definitely recommend them to anyone who is tired of wearing glasses and contacts! Thanks Loden!

I'm 20yrs. and had eye laser in May 2013, it was the best decision ever! It didn't hurt, no pain and it was super fast. It's worth it now I don't have to worry about contacts, glasses...i'm so satisfied my vision got better than expected. GO TO LODEN VISION, they are friendly and fast! You will love it too.

I had LASIK with Loden vision centers in February and all I can say is I wish I did this years ago!!!!!

I had lasik surgery completed about a year ago. I LOVE IT! I see great and Loden's was a great place to have it done. I never had to wait and the staff was always pleasant. Thank you!

Great Dr. and friendly people. Helped both myself and my Mother. Would recommend to others.

They need to address the problem and fix the damage when things go wrong. The doctor and the staff take no responsibility in providing help when surgeries go awry. These people are not your friends.