Our plumbers are highly trained to perform residential, commercial, and industrial services. Whether the job is big or small, we are the ready to provide excellent service with honest prices.

General Info
Fast Emergency Full Plumbing Service - Professional Plumbing Contractors.
Business History
Right Price Rooter has been a family owned business that has been in the industry for over 40 years! We’ve gained expert knowledge and experience through intense training, as we are always committed to grow and learn in order to provide our customers with exceptional service. We are fully licensed, bonded and insured, so rest easy that you are in the hands of professionals who are qualified to provide you service for all your plumbing needs. Our technicians are highly trained individuals who go through an intense screening process before being hired, to ensure that the morale of Right Price Rooter and our commitment to our customers are never compromised! Our field managers are also highly trained individuals who monitor each job closely to ensure that every customer is satisfied with the technician and the job that’s being done.
Hours
Regular Hours
Services/Products
Payment method
check, all major credit cards, financing available
Location
Proudly serving Glendale, Los Angeles and San Gabriel Valley for 26 years!
Neighborhood
Glenwood
Amenities
• Warranty applied to all jobs • Flexible payment options • Licensed, insured and fully bonded • Reliable and professional service provided 24/7, including holidays • We provide the price before we start the job, so there are no hidden fees • Over 20 years of experience in commercial, residential and industrial services
Accreditation 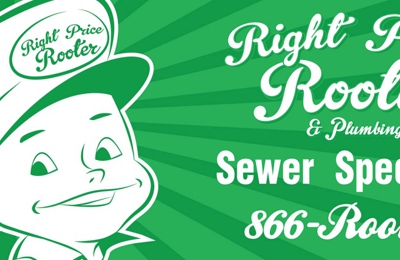 We found this company while doing an Internet search when our kitchen garbage disposal went down. We called them on a Saturday since we saw a special for $50. They came in the time frame they said they would arrive. Mick Garrison was our technician. He came in and put booties on right away and said it was company policy to make sure they always put it on their shoes. He tried to fix the disposal with his hands, but could not so we went down to get his vacuum and sucked up all the debris from the disposal and quickly fixed our problem. Then in the end, he said that he was not going to charge us and that he does not want any tip! How amazing is that!! He said he really didn’t do anything… I called another company that morning who wanted to charge me $95 (Chicago Plumbing) and the business owner said he might have to charge me more because I put Drano in the sink and that he has to wear goggles now. Mick said it was not a big deal that I put Drano in the sink and that the fee still would have been the same if he charged me. He also said if we have this problem again that he would come back for the $50 Internet special. What I love about Mick was that he was honest, direct, fast, clean and professional. I highly recommend this company and they service many areas! Looks like we found a good plumbing company that we will use and trust for a long time!

I had a plumbing problem and called a couple of companies to get an estimate. Not only the estimate given by Right Price Rooter was the lowest, but the quality of their work was excellent. I would definitely use them for any future problems and will recommend Right Price Rooter to everyone.