General Info
Power Pro Plumbing Heating & Air is a family-oriented company that has been in the industry for over 30 years. Our experienced, well-trained and committed technician provides service to all your plumbing, heating, & cooling needs. We also do more than just toilets, water heaters, and sinks. We carry top-quality brands, utilize state-of-the-art technology, and our technicians specialized on a wide range of services. All combined to meet our goal: “To exceed your expectations every time”.
Email
powerproplumbing@sbcglobal.net
Business History
Since 1986
Logo 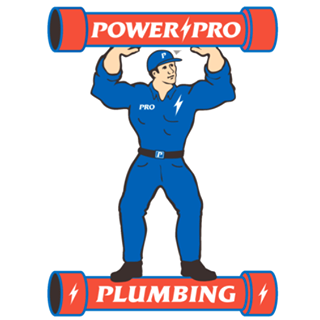 Services/Products
When it comes to the comfort of your home, you deserve the best. At Power Pro Plumbing Heating & Air, we want you to have the best experience possible& that's why we go above and beyond to ensure that, with every interaction, you feel valued and understood. No matter the situation at hand, be it a clogged drain or a water heater leak, our expert plumbers and HVAC technicians have the tools, training, and expertise to get the job done.
Brands
American Standard, Bradford White, Noritz, Peerless
Payment method
financing available, discover, visa, amex, mastercard, cash, travelers checks
Languages
English, Spanish
Other Link 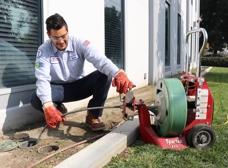 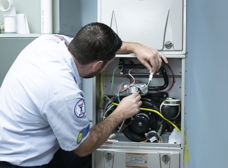 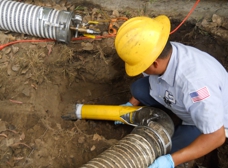 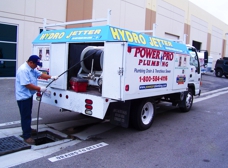 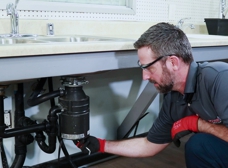 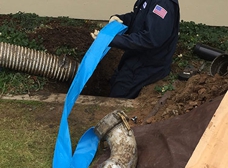 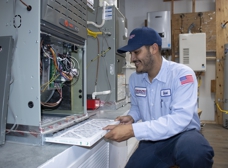 We called Power Pro this morning at 8:30 AM, and Eddie R showed up before 9:30 AM.
Thank you Eddie for explaining to us the cause of the problem and how to avoid this from happening again.

Thank you Power Pro for excellent communication and your professional service.

Sal did a through professional job and left us with a great impression of the company he represents.

Sean and his team at Power Pro have been our exclusive plumbing team for over 12 years. The have completed four major jobs on our 50 year old home that sits on a slab foundation. These were complicated jobs and they were done in professional timely manner, with a reasonable price tag and a great guarantee of 25 years or more. The team was friendly and worked fast, also taking care not disrupt our household. The even did a wonderful job cleaning up afterwards. One of the jobs was an complete new sewer line connection from the house to the street which was completed in three days! Thank you Power Pro for hiring such amazing folks and it's always a pleasure to work with a family owned company! We feel like part of their family!

Great customer service... very knowledgeable agents!!!! Had to replace my water heater and they provided me with a new one with warranty and maintenance included... they’re warranty is the best available.. peace of mind was worth the $$

Thank you Power Pro for sending Albert G. and Angel A. Who both provided great service with great attitudes on a hot hot day! They did a great job on my AC tuneup and the best part was that it was all included in my club membership! Way to Go Power Pro!

Carlos Soloman cleared out a tough clogged drain at our apartment building. Worked late for us, had a terrific attitude/personality and is a real pro. Thanks again.

I really appreciate all the people who helped me at Power Pro Plumbing and HIGHLY recommend them. From my phone calls with Amy and Maria to the service provided by Erik P., I was taken care of in the most professional and kind manner. They provide excellent customer service that is efficient and considerate. They keep you updated every step of the process.

My Plumber, Erik, so far exceeded any expectations. He really, really knows what he is doing and is innovative with solutions. My bathroom facet installation had been badly botched by a handy man who left literally, everything, from the facet and sink to the workings under the sink, broken. Erik fixed it all in a short amount of time and had to engineer some solutions on the spot. Which he did with no worries or stress. He really understood the trauma a bad handyman can leave behind and was so helpful to me in the situation. Call them. You will be glad you did.

I just left a review earlier and I can't say nothing but good things about both Mario & Alex. They make me realize how old I am when they speak to me very courteous I'm old school and I have to say good professional manners I'm also a veteran so I'm use to there professionalism.

Federico was great he knew what the problem was he gave us an quote and got it fix, will use them in the near future!

Team Power Pro,
I wanted to thank you for the quick response to my mother's water heater issue. Technician Robert was great! He explained everything prior to starting the job and did a great wrap up with us when the job was completed. When you've got a problem it's great to be able to call s company that says, "no problem"! Greg G.

No more leaks! Robert came on a Saturday to fix my leaky tub. He was very clear with details of what the issue was.  He fix it in no time.  He also offered to check out my water heater just to make sure everything was working well. He spotted a leak and all the corrosion, it will need to be replaced. Robert definitely be the plumber to do it.  I'm glad I called power pro plumbing, they are efficient and professional. They saved me from a huge potential water damage nightmare!

Jose came out to the property, and figure out the problem. He stayed with the job until it was finish. It was a very big job and Jose came through with flying colors. I am very thankful for Jose and how quickly he got the job done. Thank you again Jose.

Darryl was great! Positive and very helpful! Did a great job and never left a mess! Thanks again Power Pro! That’s why we call when we need plumbing issues fixed!

I had a terrific experience with Power Pro Plumber and will continue to use them in the future. They were professional, knowledgeable and efficient. We had a pinhole leak in our downstairs bathroom that flooded our garage. Power Pro fixed the problem and provided solutions to prevent the issues moving forward. The technician educated me throughout the process providing me with a good understanding of the problem and resolution. They were able to fix the leak and replace our broken regulator in a timely manner. I would highly recommend Power Pro to others looking for a plumber.

Watch out! These guys will rip you off! They have numerous phone numbers and service most of Southern California. They have ads on the front page of the phone book and big two page spreads inside. They offer free estimates to get one of their rip off artists in the door.

We noticed water coming up through the hardwood floors and we were very concerned. We called them out and they met with my fiance. The guy said he would have to do a video snake but never quoted a price. Then when she told him the clean-out was behind the dishwasher, he said it wasn't and he needed to cut a hole in the wall and pipe to see it. She trusted him and the guy ran the snake. He said a 4 foot section of pipe was disintegrated and they would need to jackhammer through the slab to get to it. This was the worst case scenario and we were scarred. He said this would run at least $5000, She called me and I told her to have him stop immediately and we would get a second opinion. He charged us $1250 and left after 4 hours.

When I came home that night, I called up a friend of mine who is a union pipe fitter. He said he would bring over all the tools and we could do the work ourselves. We ended up jack hammering a 5 foot trench in the bathroom to get to this "disintegrated" pipe. Of course once we did all of this damage, we found no disintegrated pipe. I was infuriated. We went to Home Depot and got a snake. The snake went through the pipe no problem. There was a minor hair clog at a T and we went ahead and replaced that portion of the pipe since we were already under the slab. The next day, I had a Mike Diamond Plumber come out and run a snake and he said there was no resistance going from the back of the house to the curb. He also said that this company is known for ripping people off. Whatever you do, do not let these guys in your house!!!

Nathan got to our house, he knew it would take longer to do than that and was honest about it. He agreed to come the next day, two hours before his shift, to accommodate us, even knowing it would be raining and the job was outside. He showed up on Sunday, got to work and was done in time for us to meet our appointment. He was kind, professional and very pleasant! Also, there was no extra charge for weekend rates plus we got a new customer discount!! Oh, and we now have hot water which is awesome. Thank you very much!!!!

Our downstairs Plumbing backed this morning. Handling a Plumbing problem was not a part of my busy schedule this morning. I called Power Pro Plumbing, and they sent their Amazing service Tech Joseph out to help us with our Problem. I watched Joseph carefully and thoroughly source our problem and within 45 minutes of his arrival our Plumbing was unclogged and working nicely. Thank you, Power Pro and thanks, Joseph. It is nice to work with a Plumbing Company that is thorough and focusses on quality!

Was told I needed a $7000 liner and it still didn't correct the problem. Tried to sell me a yearly maintenance service. I'm not giving them another penny of my money.