Customize this page.
Claim this Business
Hours
Do you know the hours for this business? 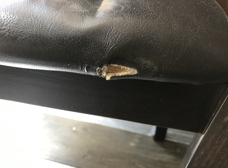 Hired these guys based on the recommendation of my neighbor, who used them for an in-town move, and was very happy. The owner, Robert Packer, was present for her move. I called him to book 2 guys to help load a U-Pack moving truck for a cross-country move (CA to NC). He assured me that all of his movers were experienced in packing these types of trailers. He sent 2 young guys who seemed to know what they were doing and worked really fast. But we were concerned when they were done and most of the moving blankets we had provided (based on Robert’s suggestion) had not been used, and we could see wood furniture that had not been wrapped. My husband and I spent several hours repacking some of the items at the back end of the truck that we could see and get to easily, but obviously we couldn’t check the whole truck. When we arrived in North Carolina, we were devastated to find that most of our wood furniture had been damaged because it had not been wrapped properly, and in some cases packed right next to metal items like patio furniture, a crib mattress frame, even a tree trimmer blade! We now have scratches and gouges in numerous pieces of wood furniture— basically everything that we didn’t wrap/pack ourselves. Many of our boxes and plastic storage bins were also crushed because they packed too much weight on top of them. I contacted Mr. Packer to let him know what happened, and sent him photos of the damage. He responded and said there wasn’t anything he could do because he doesn’t carry insurance. I wrote back and told him that at a minimum I wanted a refund of the money that we paid him. I never received a response. Do not hire these guys!

The actual guys were great to deal with, however the owner is disorganized, rude and unprofessional. We booked them through movinghelp.com. They were supposed to call the next day, however after several days I called him. We had hired them to pack the truck and had someone else to unpack in the city we were moving to. He then kept asking me to cancel the other movers so his company could pack and unpack. I told him I wouldn't. The day of the move he had his phone off and gave the workers that showed up the wrong time. Lucky for us those guys were easy to deal with.