We make you comfortable every step of the way.

General Info
If you?re looking for a heating and cooling expert, we?re here to help. Keeping your H.V.A.C. systems in working order should be worry free, and should never be hassle. We have expert specialists to take care of all your H.V.A.C. needs. We are equipped to handle your routine maintenance and emergency repairs, so you're never left out in the cold-- or the heat. If you need air conditioning installation or repairs, heating system maintenance or someone to assess your indoor air quality, we have a specialist that can help. Contact us today to put your H.V.A.C. issues behind you.
Email
Email Business
BBB Rating
A+
BBB Rating and Accreditation information may be delayed up to a week.
BBB Accredited businesses follow the BBB Code of Business Practices and pay a fee for accreditation review and monitoring. Accreditation is not a BBB endorsement or evaluation of the business’ product quality or competency in performing services. 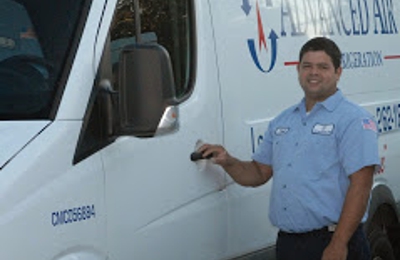 What a great experience thanks to Patrick! Arrived before scheduled time; very thorough; very knowledgeable and explained in terms I could actually understand.

They did the job. Kept the ac working at a reasonable cost. Were prompt and professional and had expertise.

I hired them for the maintenance contract in April 2018. Called them for a condensation problem this July week because the drain was clogged. They charged a $60 service fee, quoted $220 to drain and clean the drain, and tried to add $75 for labor when finished. I questioned why charge the additional labor fee since the quote was for the drain service, it was promptly removed. They did not reduce the real air charge be the service fee as is customary by most companies.

They were prompt and made the proper repair. It was a problem that was preventable with adequate maintenance. What good was having a “maintenance” contract?

The team at Advanced Air is amazing! They installed a new air conditioner in our home. From the rep Rob to the install team they were prompt, professional and the best priced in the area! We highly Recommend them for all your Hvac needs.

Sebastian provided professional-level service. He understood our complicated HVAC needs. His predictive and preventive services have kept our systems running efficiently. Thanks for the great service and service documentation.

A First Class Company! Anthony L. Serviced our two A/C units for our semi annual maintenance contract. He was polite; professional and did an A-1 job. We were impressed with the effort and thoroughness of his Maintenace work. He spent 90 minutes on the maintenance and was most thorough. We give him a 10+!

I Called and they were out within a few hours, knowledgeable, and clean. Thank you Sebastian for taking care of my A/C unit.

Anthony was great! Answered all my questions and is very knowledgeable in his field. Thank you very much.

Kevin was prompt, v knowledgeable and easy to understand. After 7 years the a/c is working great. It only took a $1000 labor and a part under warranty to work great

We've been with Advanced for a number of years and have a large home with multiple units that they service. They're our life blood for air and heat.

We have two Air Handling units. One appeared not to be working so we contacted Advanced Air to check it out. Anthony B arrived on time, & notified us ahead of time that he was on the way.
After a thorough inspection he located the problem and fixed it. We asked him how to prevent a recurrence and he recommended a slight design change which he implemented on this trip, no return call.
Anthony B is smart diligent and eager to do the right thing. We enjoyed meeting him and will definitely have him back.

Anthony B. was very technically savvy. He rapidly diagnosed the problem and set about fixing it. All in a friendly, co-operative manner while bringing me up to date on the new Wifi thermostat technology. Had the patience to suffer through several computer password update requirements and got everything up and working. Great job.

Anthony L. was fantastic as usual with the scheduled maintenance of our 2 A/C systems. Professional, Friendly, Knowledgable and a great asset to Advanced Air over the years and will be in the future. Simply the best!!! Thanks Anthony for another great job!!!

VERY dissatisfied!!! Darwin came to clean and check my unit prior to the end of the high season. The system was working PERFECTLY prior to his arrival. He arrived more than 1/2 hour beyond the two hour window, without a courtesy call. He did a rather speedy check of the exterior unit and an only slightly longer assessment of the interior unit. Recommended a $750 repair or a total replacement....which he really was pushing. Not ready to commit, I asked to think on it. Within two hours of his departure, I realized the system was not kicking on. I had to call him back out, wait another hour only to learn that a part he had just cleaned had failed....to the tune of $165. Ready to be done, I authorized the repair and got on with my day. The next day I asked two other highly recommended technicians to assess the system. Neither found the reason for the $750 repair. One even suggested that the "cleaning" that Darwin did on the interior unit caused the float switch to trip and fail. Upon inspection of the other recommended repair, we saw that Darwin was extremely aggressive with his recommendation, that the part in question was worn, but still working, and far from need of replacement. But IF it did need to be repaired, these two techs would have charged between $295 and $320 for the same part, installed. Neither felt a total replacement was necessary or recommended at this time.In addition, we uncovered a very dirty exterior system --- no cleaning whatsoever had been done. And the 2nd tech discovered that the UV bulb was burned out in the interior system -- out in the UV system that Advanced Air had installed for $996 (which I learned today I could have purchased from either one of the other techs for less that $500)! Darwin hadn't even noticed that!!

To their credit, I was given a refund on the unnecessary part AND the annual service contract that I had just signed. So they showed quite a bit of integrity, albeit a little to late for me.

The office staff is quite pleasant and helpful and were very apologetic for our experience.

Living only part time in Florida, I need to have reliable trustworthy contractors. I thought Advanced Air was one of them. After this experience, I cannot recommend them with good conscience.

The Service Specialist, Mike S was awesome. Friendly, new his job, very helpful!! Someone you felt comfortable with. Did a great job!