General Info
Deep Sea Fishing - Daily Fishing Reports - We Supply Equipment - 3-4 hour trips daily. Call if you have any questions 954-462-9194. We'll be glad to help with info on sea conditions, what is being caught on prior trips, and also if you need help with directions to the Flamingo.
Business History
The Flamingo is a 65ft. U.S. Coast Guard Licensed and Inspected fishing vessel. We are family operated, oriented, and have been taking our anglers to the “big ones”, (fish that is) for over 40 years. We are only 20 minutes from the fishing grounds so your time on board will be spent fishing, not riding. Our crew members are courteous and will be glad to instruct you on the use of the equipment, bait your hooks and take your fish off. All fish you catch is yours to keep, they only have to meet the State of Florida size regulations. All year while fishing we see lots of different sea creatures including whale sharks, porpoises, giant sea turtles, skyrocketing sailfish, and sunfish.
Hours
Regular Hours
Extra Phones 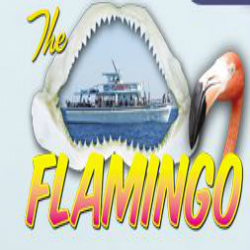 Services/Products
4 hr. Deep Sea Fishing Trips off shore Fort Lauderdale Fl. " REEL Fun in the Florida Sun on board the 65 ft. Flamingo All equipment, bait, tackle, fishing license, parking provided for only $40.00 per adult and $30.00 per child 6-12 years. Children 5yrs. and under are free. There are no hidden charges! Our crew members are on board to help you catch that memory.
Brands
Flamingo Fishing
Payment method
amex, discover, mastercard, visa, cash, debit, all major credit cards
Location
Flamingo Fishing is located on I dock in the north marina of the Bahia Mar resort and Marina. All customers turn in to the main entrance of the Bahia Mar. (where the traffic light is located) drive straight ahead, take a parking ticket @ the gates, drive thru and keep bearing around to the right. This will bring you to the Flamingo. We do validate the parking ticket, so there is no parking charge. Look for the spinning Flamingo on top of our ticket booth.
Neighborhood
Bahia Mar Yachting Center
Amenities
Free Parking that is gated and security patrolled. No matter what trip time you choose, you are welcome to stay parked in our area until midnight of the same day. We are located directly across the street from the main picnic area of the Fort Lauderdale Beach. If you have a disability that needs special attention, please call ahead so we can arrange to accommadate that.
Accreditation

We carry all the necessary licenses, also Federal permits that allow us to fish for, catch and boat several different species that are now protected in State and Federal Waters. 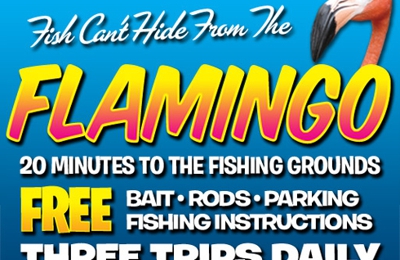 This was my second time going and this was one of the worst experiences of racism I have EVER experienced at an establishment! I purchased two vouchers for a party of 8. The first voucher went through with no problems. Second one he said had an error and refused to let the second half of my group in the boat. He told me I can call whoever and do whatever but the voucher isn’t valid. He didn’t even try to find a solution. He then said he has been doing this for years and if I think I can change something to put the voucher in myself, which I did and it was redeemed with NO PROBLEM!!! He then said I must have done something and had to RE-VERIFY my voucher ONCE again!!! The young man working next to him finally told him he put the number in wrong and that I was right. With an upset look on his face he reluctantly handed me our tickets. We also were not allowed to keep the two fish we caught which were edible fish!!! The only positive I would say is the young man who assisted him and also re-verified my voucher! HORRIBLE!!! HORRIBLE OWNER!!!!

I also forgot to add, he kept mentioning the owner wouldn’t allow this and come to find out HE WAS THE OWNER!!! I showed him my receipts from Groupon, and the total purchased which was TWO vouchers, and one of them he ha already redeemed just moments before!!

Seemed like he didn’t want that many colorful faces on the boat that day!!

After meeting the OWNER, I will NEVER spend a DIME at this location!

Outstanding service Joe outstanding mate.the best I ever been with. Will be coming back very soon. Thank you Guys.

great service. great experience. nice people. We had a great time. thank you so much for make our day great.

Excellent fun for the family! I took my family of 5 out on the boat and we caught tons of fish! Great boat, great people and tons of fun. Thank you Flamingo for creating memories that last a lifetime!