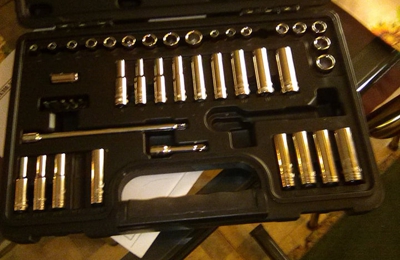 My boyfriend and I pawned a set of Duralast 32 piece toolset on July 11 2019. The whole set was complete. My boyfriend went to pick up the toolset today August 8, 2019 and the bag where the toolset was kept was ripped open and the toolset was unfortunately being used by employees. Tools were missing from the toolset. Three to be exact. My boyfriend was very upset and questioned about his missing tools. Markus, the employee he was dealing with, replaced the missing tools with cheaper tools and took my boyfriend's money. My boyfriend told Markus that his toolset was a complete set and now it is not a complete set. Markus didn't have much to say but another employee spoke up and said he is embarassed and apologized. My boyfriend said he didn't think anyone was supposed to mess with the tools. My boyfriend was upset. I called Markus after my boyfriend got home. Markus laughed about the whole situation when I questioned him and I told Markus I didn't think it was funny. Markus told me that my boyfriend was satisfied when he left and now when he gets home he is not. He said he will replace the tools if he has to buy them himself. We will be returning to the store tomorrow afternoon and hopefully they will make it right. They took money for an incomplete toolset that they returned to my boyfriend and tools that were not even my boyfriend's tools. We plan on calling an attorney for a free consultation to find out my boyfriend's rights on money that was taken from him and property that was stolen from him. My boyfriend needs to have his property returned to him or have it replaced immediately. He is out property plus money! This is not the way to run a business and not the way to treat customers. I am very disappointed.

This place has great workers, the pple are so nice and work with you. I have been going for 7 yrs now and would never go anywhere else. They treat you great.

Great deals treat you right, only time I seen them not open was christmas labor day or new years, Huge selection of guns tools and computers, there guys also know about car audio! so Please check them out!

had purchased from them previously and was satisfied so returned and found a couple shotguns i liked and was quoted a price, returned later to see about purchasing them and was told that there was no way they could sell them to me for ther quoted price and then gave me a price that i felt was rediculous. they can put whatever price they want on things, it is thier choice but to not stand by a quote and say the man who quoted me is "the dumbest guy here" is just plane bad buiseness and with the economy the way it is and with Flint losing peaple and buiseness as fast as they are they may consider treating peaple better. i recomend if you want to buy there you should be prepared to take the offer then and there, or just don't go there.!!

Integrity is most important and they have it. Ask for Steve! Of all the pawn shops in Genesee County, this is the best.

On two different occassions I tried to go in this place during there posted hours and both times they were closed.

If they are dusty dirty and the cd door barley opens you'll get a low amount Sorry they sell for 100 now and we only give 30 unless its a slim.

This listing has been claimed by a business representative.
Helpful(0)ShareFlag
tammyg81

We always get the best one on one customer service at Diane's Pawn Shop on Dort Hwy. in Flint!
They have a great selection in jewelry, instruments, movies and CD's and have friendly knowledgable sales people! We love to shop there and you will too!

This is by far the BEST pawn shop in Flint!!!! Customer service is second to none and for once you get FRIENDLY people in a relaxed atmosphere in a loan business. I wouldn't do business anywhere else! My advice is that you don't either--you won't be sorry. :)