A B C Driving School 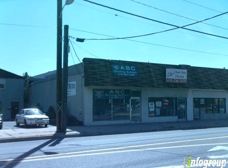 This location have the worst driving instructors. The good review was made by their own employees. I am telling you that you will not get your driving time plus the instructors will use the driving time with their own personal business. The instructor told my son to wait while the instructor went to his friend house. My son waited for at least 15 to 20 mins. outside.

I can not speak for all of them but,DO NOT use the ESSEx OFFICE they are RUDE and unorganizied!!!! They told my daughter if we paid 50 additional dollars we get faster drive time NOT!!!!!! there was a mix up one day,then the instructor had a problem. i called to see what the problem was THe young lady I guess who runs the office had nothing but excuses and was rude Fri. when I called after the instructor was over an hour late she had no clue what was going on then was very nasty when I expressed my concerns I asked for a manager she told me there was NONE??? everybody has a boss she then informed me about the owner I asked to speak to him each time he was not there and was told she could address the problem but,YOU are the problem. You speak to one person they give you a date or info but the next person you speak with has no CLUE what you are talking about we have paid 4004 total and have recieved one driving lesson ""rescheduling is not a problem"" but when you call there is always nothing open again what was the 50$ for watch it they will get your money then you are forgotten about!!!

This school has several different locations. My son took his Driver Education at their Timonium location.

I must note that my elder son had taken his Driver Ed at a COMPETITOR who had been highly recommended. Neither elder son nor I were impressed--none existent customer service (leave a message) and a cattle call mentality. My elder son actually told me that it was a good thing he knew all this stuff anyway because the classes were a complete waste of time.

TOTALLY DIFFERENT EXPERIENCE WITH ABC. I was much more nervous about my younger son taking driver's ed since he has severe enough learning disabilities that he actually had to have a personal assistant in high school as part of his IEP.

The instructor not only made accommodations in the classroom but actually allowed us to take home the overhead slides to photocopy. He also provided my son with extra study materials and practice tests.

My son stayed engaged (the teacher was an outstanding lecturer) and passed the final exam with a 90% score!

We are still working through the driving sessions but so far I continue to be impressed. The on-the road instructor (who is a different gentleman) has been very patient and encouraging with my son, who has a normally high anxiety level anyway.

Sixteen year-olds who think that calling the day after finishing the 30 hour classroom session and expecting to immediately get their drive-times need a reality check.

All driving schools have to work with a time lag because of the reality that while you can fit 30 kids in a classroom, the driving sessions have to be one-on-one. A month is not unusual, and sometimes it is 6-8 weeks because summer is a popular time for drivers ed.

ABC is about $25 more expensive than other schools but in my mind, it is money well spent.

They won't even let you call to schedule your drive times until at least a month after you finish your class. They are rude and unprofessional. Worst driving school in the area!!!

Hard to believe these people are still in business. I used to be an office manager for a local driving school, and one of the most important duties would be returning the messages left by your customers! How do you expect to make any money when nobody ever calls the customers?! Over a span of five days, several messages were left, and every time you call it goes straight to a voicemail, apparently nobody is ever there to answer the phone! Finally got through on day six, the girl that answered said yes she got my messages but has been too busy, yet when transferred to the manager he insists theres no way I called and left messages that many times!! REALLY?!?!! Train your associates!

I just passed my driving test yesterday after the third try. I have driven with three different instructors from three different driving schools. David from ABC is the best one! His instructions were easy to follow. He made parallel and reverse parking very simple to me. He is also very patient and friendly.

I don't know about their other drivers but David is the one to drive with if you want to pass!

This place is ONLY concerned with your money. They think they can behave in such an offense manner because other driving schools are closing down and they receive their overflow so you have no choice but to put up with the BS. They rip you off regarding your time and I was called an; ""idiot"" when pompous, pretentious Ryan called me with an attitude as soon as I answered the phone to inform me they had messed up, yet again. Though you sign paperwork on your first class, it is not made clear by the time they get you out the door that your balance MUST be paid IN FULL before you go on the waiting list (3 weeks minimum if you are available ""anytime"") for driving hours. They give you the impression you have 6 months to pay your balance. After not hearing from them for over a month after I had my last classed and passed the final, I called and was told they lost my paperwork but a woman scheduled my 3 - 2 hour driving lessons with one of their instructors. I was able to go on the first lesson and planned to pay the 50 dollars I owed then, however, they were not open even though business hours state they open at 9:30 and it was well after. Mr. Don is one of the only things that makes this place worth your time, he is a character and you learn a lot when he teaches class. My driving instructor Prince was also very nice and professional. However, that does not make up for the fact that hours are fudged, they are very disorganized, class is hectic so it's hard to concentrate and they care not for their customers. Don't be an ""idiot"", trust your child and your hard earned cash to some place more responsible and reasonable even if it is a little out of the way.

I've had 2 children take driver's ed at other local driving schools. For my oldest son, we simply chose the cheapest school in our area. Big mistake! The classroom was a mess, and when he finally received his driving hours, the driving instructor shorted him on his time by at least a half hour per lesson. When it came time for my daughter to take classes, we enrolled her at Eagle 1 driving school. Well, they were even worse. They closed down halfway through her program and we still have not been able to receive any refund. After that debacle, I called ABC to finish her instruction. What a difference! Everything was delivered as promised. My daughter was able to schedule all 3 of her driving lessons within a week of calling ABC. Everyone there was very friendly and professional. I regret ever choosing other driver education schools, and I highly recommend anyone that needs driving instruction to chose ABC.

Driver instructer was awful. He refused to let my daughter sit on pillow on last time out even though she could not see where she was going and they have a pillow in the car that she had used before. He also took her into a school zone just as elementary students were getting out and all over the road on her first day and she almost hit a child. No one it their right mind would take a brand new driver through a school zone at dismissal time. Everytime she went with him she came back upset we are glad we are done. Would not recommend them unless they get better driver instructors.