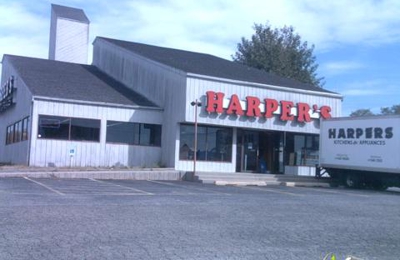 Before I begin let me say numerous emails and telephone calls have been made to Harper's Appliance on Route 40 and the also phone calls to the Eldersburg Store over the last couple months and WE are extremely frustrated with the service OR lack there of we have received . On 3-24-15 I accept a delivery of a GE double oven stove, GE French door refrigerator, a GE microwave, a GE trash compactor and a GE dishwasher. I was so excited to work with a family owned business that has been around for many years. BOY WAS I WRONG!!!!!

I thought I saw chips in the refrigerator door upon delivery but the tall belligerent driver said that I was wrong - that after I took the wrapping paper off there would be no problems. I should have listened to my gut and sent everything back immediately as the refrigerator door did have chips in it and I am still waiting for a repairman for replacement. And to add insult to injury today 5-8-15 the top part of the refrigerator is now giving a reading of 68 degrees AND all the food inside is spoiled. After spending a long time on the phone with GE and being transferred from agent to agent GE said they would send a repairmen out on Monday 5-11-15 AND to call the food spoil phone number they gave me. IMPOSSIBLT TO GET THRU!!!!!!!!

I then called Harper's Appliance on Route 40 in Ellicott City, Md. and I was told the owners were not available but James one of the owners would be back on Monday. I was also told they had a list of repair people who could come out today BUT I would have to pay for the service call myself. The top oven light is also out and Harper's said not to do anything but wait for the refrigerator repairman to come and let him know so he can check the oven out and that we did not need to call GE ourselves since this was within our first 30 day warranty.

As I stated above we still do not have a repairman for the refrigerator but my husband decided to give Harper's Appliance the benefit of the doubt and wait. ANOTHER MISTAKE The compactor stopped working completely on day 27 and I called Harper's Appliance and was told NOT to bring the compactor back as I would get a restocking fee for a broken item. I was confused that they would put a broken item back on their SHELF AND RESELL IT TO SOMEONE ELSE?

Like I said earlier my husband and I have called many times and sent emails but I am constantly told the owners are not available BUT when I start yelling and hang up James the owner usually calls back in a few minutes.

Isn't it funny that when we were looking to purchase the appliances THE OWNERS WERE ALWAYS AVAILABLE !!!!!!!!

At this time I would say BUYER BEWARE as I can't say why the items are not working - manufacturers defect, seconds or delivery issues. WHAT I CAN SAY IS THE WAY HARPER'S APPLIANCE HAS HANDLED THE PROBLEMS IS REASON ENOUGH TO RUN TO A RETAIL CHAIN STORE AND FORGET THE LITTLE GUY!!!!!!! I would love to return ALL the items and never hear the name Harper's Appliance again. How sad my family has to go thru this after spending thousands of dollars in their store!

We purchased all new major kitchen appliances plus a cooktop hood at Harpers in the fall. We looked around at all of the competitors including the Pacific Kitchen & Home within Best Buy's store. Harper's prices were actually better, the selection was great, the staff very knowledgeable and friendly; plus they were willing to make some substitutions of manufacturer offers. All of this made it a no-brainer. They even held our appliances until our remodel was complete and we were ready to have them delivered. Free delivery. I highly recommend Harpers.

I set up an repair appiontment from their Eldersburg office. They came out told me they needed a part so they would be back next week with the part. They never showed or called to let me know they wouyldn't be there. So I set up another and again nothing, NO-SHOW & no call. So I went back and asked what was going on. They called the repairman and set up another appiontment. And again no-show. Went in again and said this was my 4th visit to get my repair done and that no one has come or called for three different appiontments. So we set up a 4th appiontment and know its been 3 weeks since that appiontment has come and gone. I'm moving on.