Trust Us With All Your Plumbing, Heating & Cooling Needs

General Info
Call Mattioni’s for all of your plumbing, heating & air conditioning needs. We provide upfront pricing and get your approval to ensure you are 100% comfortable before we do any of the work. Plumbing: Call us for plumbing when you need inspections, repairs, or replacement of regular and tankless water heaters, garbage disposals, toilets, faucets, water conditioning, or drain and sewer inspections or cleaning. Heating & Air Conditioning: We have the expertise you need for heating and air conditioning tune ups, repairs, and new system installations, indoor air quality checks and improvements.
Business History
For over seventy years, Mattioni Plumbing, Heating & Cooling, Inc.'s dedicated employees have proudly served the Chester County, Pennsylvania area with their knowledgeable, courteous, and professional service. A.F. Mattioni & Sons Plumbing & Heating was founded on the Mattioni family farm along the (back then) very rural Route 113 outside of Downingtown, PA in 1948. The original barn which housed the company still stands! However, a newer, larger building on the family's property is the current home for the third generation of Mattioni’s to run the service-oriented business, but their commitment to quality has not changed.
BBB Rating
A+
BBB Rating and Accreditation information may be delayed up to a week.
BBB Accredited businesses follow the BBB Code of Business Practices and pay a fee for accreditation review and monitoring. Accreditation is not a BBB endorsement or evaluation of the business’ product quality or competency in performing services. 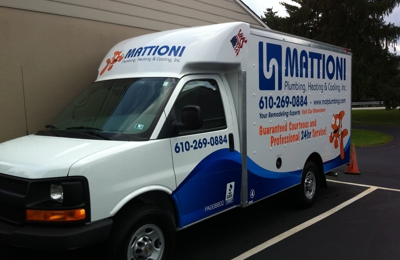 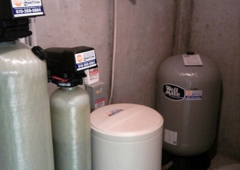 Needed our AC serviced and called Mattioni. They came within 4 hours of our call. We had never done business with them before so this was a pleasant surprise. Sam B was the serviceman that came and he was 5 star from the minute I answered our door. He was pleasant, courteous, and explained things each step of the way. Sam was the best service man I have ever dealt with. I would highly recommend Mattioni and if you are lucky enough to get Sam then you can feel secure that you are in good hands.

Sam B worked on our heating system today for our winter review. As always, we received service from Mattioni's that was above and beyond our expectations. Sam was professional, took time to listen to our concerns and explained any recommendations or services we may need. Thank you again for another friendly and professional service.

I went with them because I saw all the good reviews. They baited me with a $99 special for servicing my heating unit in the winter month of January. After inspection the technician mentioned that there might be some issue with my heat exchanger and gas valve and promised to returned back with a so called field supervisor. They came right next day for a follow up inspection. With minimal testing the supervisor came to the same conclusion. They immediately created a panic amongst my family and shut the heat off. They put a lockout tag and scared us with no liability waiver and said if I turn the heat back on, there could be CO poisoning. They quoted me a whooping $3000 for replacing the heat exchanger and gas valve. For the cracked heat exchanger, when I asked them to check the CO levels, he said he does not have one on hand. Then I offered to buy one from hardware store and he said those don't detect anything below 30 ppm and are useless. I was insisting that he shows me proof of high CO levels but he would not show me. That triggered doubt in my mind and I tested him further by asking him to replace just the gas valve ($500) promising not to turn the heat on, although I was not smelling any gas. He refused to replace the gas valve alone and wanted to do the whole job. As soon as I told him don't want to fix anything he got very upset and and started scaring us more about the CO poisoning and explosion hazards. I went out to another reputable company in the area and had them inspect and of course all tests came negative with no issues. In the end I realized that these are a bunch of crooks who are earning their money only by tricking people into buying things they don't need. The field supervisor was only a sales person. I have not met so unprofessional , money hounding greedy people as Mattioni plumbing in my life. Stay away from them. If they say there is an issue at least get it double checked by someone else, Or you will loose your sleep and money

Fast on time , easy to work with, very good Plumbing skills , and explained all facets of the testing.

Patricia & Terry G. were both very helpful with scheduling and correcting bathroom tub and sink plumbing issues. Easy to schedule, arrived when they said. Terry G. was knnowageable and personable. Work professionally done by all!

Very prompt, answered our questions, got the job done promptly!
Highly recommend Matt J. to anyone!!

The employees from Mattioni Plumbing, Heating & Cooling came in and installed the new heating system with no problems. They quickly and efficiently completed the job! They are professional and provide excellent service. We have been doing business with them for years and will call them again for repeated business. Thank you Shawn & Lou!

Caught out! Don't even rate 1 star.

Mattioni having been servicing my air and heat units for several years. I have become increasingly suspicious because there is always something "wrong" with my relatively young units which have been in use since Nov 2006. On top of their $40 a month service contract fee it costs me at least $500 twice a year when they come.

They came to service the AC and found refrigerant leaks in both units. Their estimate of repair cost $4,000, so I decided to get a second opinion. The second guy said the units should not have leaked, there was no sign of corrosion, he suggested tampering as it would be easy to make pin hole leaks and it's ridiculous to have both units spring leaks at the same time. However this cannot be proved. The new guy made a temporary fix that could last a couple of years but the damage is done. He charged me $210.

Consequently I canceled the contract with Mattioni but now they keep bugging me. Only wish I had canceled before.

Terry was a true professional. He gave me lots of options and worked with me to keep the cost at a minimum.

Good work, but totally overpriced ! The technician was here for 1.5 h to fix an air condition problem. The value of the parts he had to use was less than $50 and the bill was $460 for 1,5 h of work. That wasn't the 1st it happened to me with Mattioni, but definitely the last time. Until they change their pricing policy to a parts and per hour model instead of fixed price calculation, I won't use them anymore!

Matty J saved the day! It didn't take him long to get my heat back up and running recently. so nice and knowledgeable! I know will be sure to call Mattioni and ask for Matt anytime i have a plumbing, heating, or cooling issue in the future.

Jarred did a fine job replacing and updating our natural gas hot water heater. He was helpful in explaining our options, and was very prompt and friendly. I plan to use Mattioni for my plumbing needs in the future.

Mark is a total professional. He was on time, worked efficiently and solved our plumbing problem. He patiently answered all of questions and made recommendations for maintenance.

We will use Mattson's in the future.

Kelly was great in terms of working around my schedule.

Mark & John called early, which was ideal. They were very professional and helpful. They provided a detailed explanation for everything and obviously they did a great job at fixing our issues.

Mark showed up on time, did a thorough job, and made sure we understood the issues we had with our plumbing. Once he explained it to us, he went over our options and then fixed our issue on the spot. We have come to rely on Mattioni for all our plumbing needs. They are probably the best plumbing company we've found in years.

Mark was prompt. Arrived on time. He was professional and very neat. Because of his service we would definitely use and refer Mattioni for service.

Always professional, polite & knowledgable no matter who does the service. Shaun was great!! The office staff deserves a pat on the back as well.

We have used Mattioni for several years for a variety of jobs. Everyone is professional, polite and knowledgeable. Most recently, Mark did an inspection and was on time, efficient and maintained the standards we have come to expect from this quality provider.

We contracted them to complete a bathroom remodel. The work was exceptional, they stuck to the planned timeframe and the service was excellent. Most painless remodel ever. Thank you!