Call Today For a Free Estimate!

General Info
We now serve the Denton Texas Area including Corinth Texas and surrounding Area. We are a Full service contractor We provide the best price never sacrificing quality to hurry up the job. We offer honest evaluation and pride in the smallest detail. We want to be your next door neighbor and for you to feel part of our own family. We have been proudly serving customers since 1980 our goal is to make the service experience you receive from us the best service you ever receive from any encounter of any kind you have ever had. We are committed to providing only the highest quality craftsmanship, backed by service that is friendly and prompt. Because all of our customers are important to us, we are dedicated to making your experience a special one. That is why we always go the extra mile to make sure all your needs are met and questions answered. We specialize in Service and repair the small things others don't want, but whether you need a bulb changed, entire remodel or full construction install we are the full service and construction company for you. 20994 “Regulated by The Texas Department of Licensing and Regulation, P.O. Box 12157, Austin, Texas, 78711, 1-800-803-9202, 512-463-6599; website: www.tdlr.texas.gov/complaints”
Business History
Serving Customers since 1980
Hours
Regular Hours
Logo 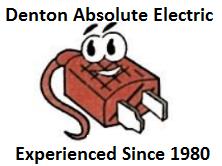 Services/Products
SPECIALIZING IN SMALL JOBS NO JOB TO SMALL, or to large. Upgrades and Improvements All lighting, interior and exterior. Safety and Security. Energy Savings, GFI outlets, breaker box and meter base Upgrades and Retrofit Electrical System, Upgrades Data Lines, new Circuit Installation and Upgrades, such as ac units, ovens, microwaves, any new wiring ,. Remodel and construction.
Brands
we service all brands assoiated with the electrical industry
Payment method
check
Location
Denton Texas , Corinth Texas and all surrounding areas.
Amenities
Home Town Full service contractor We provide the best price at the most efficient work pace never sacrificing quality to hurry up the job. We offer honest evaluation and pride in the smallest detail. We want to be your next door neighbor, part of your own family.
Accreditation Vince does a great job of getting you done NOW. I really appreciate that & the work has been great. Very reliable & I will recomend them often

Perry Finch of Absolute Electrical did a fantastic job! I highly recommend him and his company!

Very professional and knowledgeable! Went above and beyond to help.

I have utilized Absolute Electrical Service several times in the past 3 years, and I have been EXTREMELY pleased each time. The technicians arrived on timeand were friendly, professional, and very courteous. Each of the electrical repairs were completed promptly and efficiently. I am very pleased with Absolute Electric Service, and I will continue to utilize them for future needs. In addition, I wholeheartedly recommend them to anyone who has electrical needs. Marlene Harper

I needed to add some plugs for new appliances I am getting. Vince sent Perry out within 2 days of my call...(almost unheard of these days) Perry was able to do the work very quickly. But while he was here, asked him about a light switch that we have wanted to install for the past several years. Other electricians were at a loss always promising to come back and install it but never following through. Just a plain light switch. Perry found the wires added the switch and all is done...AMAZING. You have to wonder about people...do they really want to work? I highly recommend this company. A++

Day prior to my daughter’s annual sleepover, my lights started flickering and going dark. I called Vince late in the evening and was sorry to have interrupted his football game, but he was very courteous and helpful. I was desperate and he was able to calm me down and help me out. He followed up with me the next morning which to me showed outstanding customer service. I had already had another electrician come by and spent $125 trying to figure out what the problem was with no success.. He was thorough and detailed when it came to explaining the cause of my problems and the options available to me. He helped me work out a solution that solved my problem and worked for me. Perry was also very courteous and gave outstanding service. I would definitely recommend Absolute Electric to anyone. Excellent service from good people. Thanks for your professionalism.

My kitchen light switch needed replacing, and once I got through my breakers would not reset. A call to Vince at Absolute proved to be a lifesaver. Despite it being late Sunday morning, Vince took the call and was on the spot within an hour. He worked quickly, troubleshooting the problem and took time to rewire the box. A reasonable charge, professional demeanor and our troubles were gone. Thank you Vince!

I notice that my electricity light was flickering. I called TXU they came told me it was not their problem, cut the power to my house, and told me I needed an electrician. It was Sunday evening, the Cowboys was playing the Redskins and I needed an electirican, because I had no power. I found Mr.Vince with Absolute Electric, he came within the hour and was finished in two hours. My power was restored. Granted I didnt get to watch the game, but he was very professional, prompt and most of all he fixed my problem and not once did he complain about being at my house working on my electricity on Football Sunday, and most of all he did not over charge me either. You could not find a better man, I really in my heart believe Mr. Vince saved my life well more like saved my house. I would refer him to everyone I know, he was totally professional, and like I said, there when I needed him most. Thanks Absoulute Electric (Mr. Vince) you are a lifesaver.

On Thursday, 09/11/2008, I lost power to my central air conditioning unit due to a burned leg on my Electrical Meter Base. Thinking the problem was with my air conditioning unit, I called an air conditioning repair service. After troubleshooting, the a/c service man found the problem to be a leg on the base of the electrical meter. The leg was burned to the point of actually heating up the wiring and creating a potential fire hazard. The a/c man disconnected the original thermostat and installed a another thermostat on my wall across from where the original thermostat was mounted. Since the thermostat was not the problem, I payed for a thermostat I did not need and still had no a/c. I called Oncor Electric and after examining the base, this was confirmed. I called an electrical contractor and he came out, looked at the problem, told me he would try to get the part and would call on Friday. By 7:30 PM on Friday night, I had not received a call. Realizing it was a weekend and it would probably be impossible to find anyone to fix the problem until Monday, I would simply have to wait. I decided to check online and after searching the first page, I saw Absolute Electrical Service and decided to give it a shot. I called, explained my problem, set up the time for 10:00 AM Saturday morning and at 10:00 AM sharp, the truck rolled up. The problem was fixed in about 10-15 minutes. NOW, I KNOW WHO TO CALL.

Thanks for the great service.

Always gives a detailed report of the work being performed before & after the service.

Attic job in August mid afternoon was done to perfection..Great work in a very poor atmosphere..

The plugs in my bathroom stopped working and I called absolute electric and asked them to come to my house and fix the problem. They walked me through the reset procedure and now my plugs work and they saved me a service call. Most people today would have scheduled a service call and reset the circuit breaker and charged me for the service call. It is so refreshing to find an honest service man who is more interested in making the customer happy than he is about making money. Thank you guys, you will be the first I call next time.

We were very pleased with the work. The electrician was very courteous and knew his job. He didn't fool around and the job was done in a timely manner. If we need any many work done we will definitely call Absolute Electric.

We would highly recommend them for any electrical work. Robert and Billie Clark

We needed a plug added in a wall and they came out within two days to complete the work. The gentleman was in and out and even did another service for us. Good job, would tell anyone to use them and look forward to doing more business.

I needed someone quickly at the last moment to install an outlet for a new gas cooktop I had purchased just before a dinner party I was giving. Absolute Electrical sent out an electrician within a couple of hours of my call, got the job done quickly, and charged a reasonable price. It wasn't the first time I had received a quick response from Absolute Electrical when I couldn't find anyone else. Great service!

The Absolute truck rolled up within 2 hours of my call. Electricians Perry & Chad listened to my tale of woe & got right to work. They discovered multiple electrical atrocities commited during a previous remodel, showed them to me, then fixed them all. They were fast, friendly, competent, & I especially liked that they kept me in the loop. Two excellent technicians, several hours, $424... big bucks, but a good bargain. The house is a lot safer & I have a better understan ding of its layout, its function, & how it was modified. Thanks, guys.

They are prompt and on time.

They rearranged their schedule just to fit me in on the same day.

Very knowledgeable about their field.

Would recommend to friends and family

The service has been exceptional each and every time that I've used Absolute Electrical Service. They have always been on time and the quality of the work has been outstanding. I would highly recommend this service.

Vince was great to work with and very responsive to my needs - as others have stated - he tried walking me through a few simple "fixes" over the phone and when those didn't work he agreed to send someone out to troubleshoot.

Perry came by today and within a very short time discoverd the problem and had it resolved. When he quoted me the charges - I was shocked! But, shocked in a good way. I didn't know you could get anyone to come to your home and conduct a repair for those kinds of prices.

I will recommend Vince and the Absolute Electrical Service Team to all of my friends and neighbors, and will most definately keep his number handy for the next time I need an electrician.

Thanks Vince and Perry!

We were in a quandary. I had returned home from a trip, my wife told me our upstairs AC was out and it was HOT (middle of June). I found a tripped breaker that would not move and started calling electrical services. Everyone was booked, but this company agreed to come out that day if they could fit us in. They were able to come out, fix the problem, explain the problem and charge a reasonable price. I am impressed and will use them again if necessary.