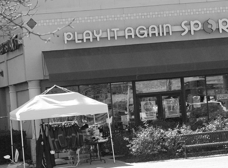 I bought a NEW elliptical 10 days that they assembled. I picked it up 4 days ago. The LCD panel doesn't work. Instead of exchanging it for a new one, they told me I needed to go to manufacturer, which I have done and they are handling but it still could take a couple of weeks.

Literally brand new out of the box and they wouldn't exchange so it would take a day instead of a couple of weeks. Customer No Service as Clark Howard would say.

I came in with a couple of brand new baseball helmets. They offered me a price and I said I needed to speak to my wife to decide cash or store credit, and would most likely return as my son plays several sports. I was told it would not be a problem, they gave me a WRITTEN quote.

My wife made the stop after a doctors visit with our 8 month old. She was alone and brought a box with the helmets, the WRITTEN QUOTE, and other items including bats we had previously purchased from "Play It Again" that also had the stamped markings of "Play It Again".

They refused to accept the WRITTEN QUOTE, because they said an employee had made a mistake. They offered her less than the original quote for everything in the box. Another employee spoke up and said he could not do that because the bats were marked, there was a specific price for them. The other employee interrupted him and said we are not taking bats period, this is the only offer. They were rude and disrespectful to my wife who was shocked by their attitudes. They refused to assist her to her car with the box and baby in hand.

I WILL NEVER SPEND ANOTHER PENNY WITH PLAY IT AGAIN SPORTS....EVER. I WILL SHARE MY EXPERIENCE WITH EVERY PARENT WITH MEET WITH OUR SONS SPORTS TEAMS.

These guys are rude and nasty!

Run the other way!

run the other way !!!!! extremely poor customer service. The store manager refuses to take responsibility for damage caused by his employees. In fact, he won't even take the time to speak with a customer that has a problem.. They will never get my business again !!!!

it is very nice and they need to go check it out for them self also...