General Info
WE OFFER PROFESSIONAL AUTO REPAIR, SPECIALIZE IN FOREIGN AND DOMESTIC CARS Davie Motors is proud to be the leader in automotive repair and service in our community. We are committed to providing our customers with a wide range of quick and reliable services at an affordable price. Our highly trained professionals are ASE certified and have been serving the South Florida area for over 20 years
Hours
Regular Hours
Brands
AUDI, BENZ, BMW, SAAB, VOLVO, VW
Payment method
carte blanche, check, debit, financing available, insurance
Neighborhood
Davie Heights
Other Link 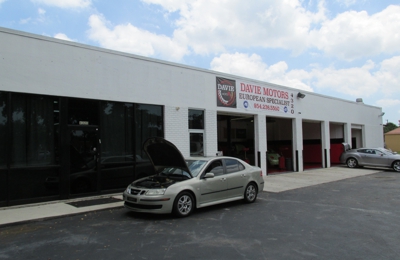 After being disappointed with the service it was corrected by the owner Duron, in which he fixed the problem at no charge and was very helpful and professional about the whole situation. I highly recommend this place for any car repairs due to there honesty and integrity shown at all times making the customer happy no matter what. Awesome job to George and Georgie you guys are like family. Peace.

Davie Motors was a total life saver! I was driving my BMW until my engine stopped working properly and the screen said "drivetrain malfunction". I was referred by a friend and the were quick to assist. First they hooked me up with a $50 tow company which was amazing. Then they ran through the different possibilities of what could be wrong with my car and finally found the issue quickly. Then worked with my warranty company and got my price down from 1,900 all the way down to $580, Amazing!!! Plus there service was amazing and they kept me up to date all along the way with the status of my vehicle. I HIGHLY RECOMMEND Davie Motors to everyone!! 5 star service!!!

I have. 2008 volvo xc90, I had a problem with the air conditioner, I took it to the dealership but after 3 attempts, they couldn't solve the problem. A friend recommended Davie Motors so I took it there and they found and fixed the problem right away. The air condition runs perfect and the price was very reasonable. I highly recommend them and will definitely take my car to them in the future.

My first Volvo was an S70 purchased back in 1998. I’ve been a member of the Volvo owner’s club, VCOA, and the three main Volvo-specific message boards: Volvospeed, Swedespeed, and Turbobricks, for fifteen years. I’m thoroughly familiar with the problems that arise with my specific model year of Volvo, and I know how/where to go to get credible information on diagnosing problems myself. I’m extraordinarily picky about letting a mechanic or a dealership work on my car.

Last year, my V70 was having wheel bearing issues, a metallic grinding noise that got louder as speed increased. Davie Motors facilitated a quick repair by allowing me to bring my own Volvo parts. While in the shop, they identified a tire issue that very likely was contributing to the noise the car was making. They worked with their preferred tire shop to get new tires mounted and balanced in a short time period. I told them I wanted Michelin Pilot Sport A/S with a recent manufacturing date code, and they made sure the tire shop delivered exactly what I wanted. Davie Motors also provided me with a copy of tire purchase documentation that allows me to make a valid warranty claim, if needed.

Given that Davie Motors went over and above what one might expect from a repair shop, I did not hesitate to let them look at my other car, the S60 R.

For about a year, the R had been having intermittent engine hesitation issues. After a very recent install of new tires, I’d experienced a rumbling in the front that was somewhat speed related. I called Davie Motors and made an appointment for the next day.

I described the issues to them, and their staff listened carefully and without any condescension. My impression was that their focus was in getting to a one-time effort resolution to the problems. The owner called me later the same day, and we went over the symptoms and possible solutions to both problems. In both cases, they recommended possible solutions that I could take myself in the short and medium term.

For the rumbling issue, Davie Motors was correct in identifying a tire/wheel issue as the culprit. Their diagnosis was confirmed by the tire shop at Sears. For the engine hesitation issue, I’m confident that the parts-replacement path I discussed with the owner will very likely get to the root cause.

For all of this help and guidance for the S60 R, Davie Motors charged me only 1.5 shop hours. This is a total bargain given that many shops would have thrown parts at both problems until something happened to work out.

For an experienced, knowledgeable Volvo enthusiast, Davie Motors is the best one could hope for in a mechanic. Most importantly, they listen without giving attitude. They are more interested in getting the problem identified correctly and then fixed, rather than throwing parts at the problem.

The owner is a former mechanic, not a service writer. Being able to talk with him about the issues in person and on the phone is spectacular. My only regret is that I did not find Davie Motors sooner!!!

Davie Motors is fabulous. We broke down in my 2000 Volvo S70 on the FL Tpk -- the beginning of a 1500 mile trip. We found Davie, they treated us great. Very knowledgable, great customer service, fixed the car before it was promised. If I lived in South Florida, they would definitely have my business. It's a pleasure to find service of this caliber, it is so rare.

Great local shop! I have been looking for place to bring my BMW M5 for service after my extended warranty and maintenance package expired. I found these guys on the web and after speaking with Jay in the office I decided to give them a try. The staff was very friendly and professional. Doron and Jay were extremely knowledgeable I felt quite at ease allowing Davie Motors to work on my car. They advised me that I didn't need to have my spark plugs changed even though BMW recommends it at 36k, saving me around 500 bucks! They gave me a great price on my oil change and brake fluid flush. Doron explained everything that was going on and did not try to upsell me. I was able to wait for the service to be done and I was in and out in about 90 minutes. I'll definitely be taking M5 back here.

Experienced mechanic that knows Volvos inside and out. He has been doing repairs and services on volvos and european cars for 16 years. I will always go to davie motors for my automotive repairs best auto repair shop in florida

i'm a 2nd generation Volvo guy I grew up in 240 wagons and am now on my 2nd S40. As such, I know Volvo. After I hit a pothole my ABS light went on with the ABS / Anti-Skid Service Required text showing. I had a feeling my front right wheel sensor was toast so I took it in. They read the codes for free and ordered the part. Brought it in the next day and they replaced it in about 30 minutes. They also alerted me to an issue with my fuel pressure sensor (I'd been having some hesitation issues but couldn't figure it out) and offered a very, very fair replacement price. Highly recommend!