Brands
EconoLodge
Payment method
amex, discover, master card, visa, diners club, all major credit cards, carte blanche
Location
With a stay at Econo Lodge in Cranston, you'll be near the airport and minutes from Garden City Center and close to Roger Williams Park Zoo. This hotel is within close proximity of Lincoln Park Cemetery and Museum of Natural History and Planetarium.
Other Links 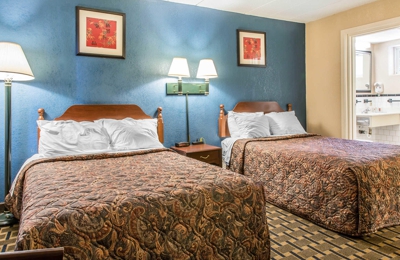 I checked into the Jacuzzi suite 165 and it was disgusting. The Jacuzzi tub was full of dust lint and hair. The tile around the tub was dirty and had mold around it. I then went into the bathroom to find blood stained towels. The shower curtain and ceiling above the shower were also covered in mold and dirt in the tub. There were piles of dust and dirt in every corner of the bathroom floor. Even the hair dryer was covered in dirt and mold and was also completely broken. I then look inside of the fridge in the room and it smelled of old food and also covered in mold. The curtains were also covered in holes that were repaired with black tape... When I went to the front desk they said they would call housekeeping but I said I was leaving and wanted my money back and showed the manager the pictures I took of all the dirt and mold and he told me I would not be refunded due to checking out. I then called Choice hotels who I booked the room through and they compensated me for the inconvenience and tried contacting the hotel manager who claimed to remember my complaints at check out but lied and said he didn't discover any said stains. I am disgusted not only in the room but how I was treated by the manager of this hotel. He was rude and did not care about my dissatisfaction in his hotel. Please do not give this hotel business it is a waste of money and a health risk.