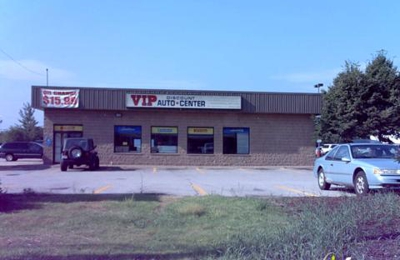 Concord VIP has been extremely helpful every time I have gone to the store. They have been helpful with suggestions and advised appropriate parts for both of my vehicles. I would highly recommend the Concord VIP.

We purchased snow tires from VIP in Concord, NH back in November 2008. The woman that sold us the tires stated that switching them out every spring and every fall would be free because we purchased the tires there. We made the decision to purchase from VIP based on the fact that we were told we would get free change-overs, even though Sam's Club was cheaper. Sam's was going to charge for change-overs, so we decided to go with VIP. It is now spring (April 2009) and come to find out change-overs are NOT free! Although they offer a discounted price for this-$39 (by the way, did you know that $39 was 50% off of $60????? I have an MBA and I thought that $30 was half of $60....fascinating). In reviewing the paperwork from when we purchased initially, there is no language that says change-overs are free. Shame on me for trusting these people and not getting this in writing. Consumers beware.....DON'T purchase from VIP. They are lying to customers to sell tires.

In fact, my fiance's brother and father purchased snow tires around the same time as we did, back in November. They were ALSO under the impression that change-overs were free. This is just the 3 customers that I know that have used VIP and been LIED to.

On top of realizing that we had been lied to, when we attempted to have a discussion with the staff at VIP (which started out with the woman that sold the tires) they were EXTREMELY RUDE and basically told us that we were lying and that no one ever told us that it would be free. In fact, the woman (long curly hair with lots of makeup and jewelry) that sold us the tires LAUGHED as we were having the discussion with the manager about this!!!!!! I'm sure it is really funny to deceive customers just to make a sale.

I will be marching in there on Tuesday to have a discussion with the store manager about his staff's lack of ethics and customer service etiquette. We'll see if we get our $39 back, but regardless they have lost 2 customers along with all of our family and friends that live in this area.

I wish we had known back in November that Town Fair Tire offers free change-overs, balance, rotation and front end alignments because they would have received our business instead.