General Info
Calhoun Plumbing is a premier plumbing service company in central Ohio. Calhoun Plumbing was established 1992. We are a full-service plumbing and drain cleaning company. Emergency service is provided 24 hours a day. We are glad that we can be of service to you. Our mission is to keep being the best plumbing service company in central Ohio. We feel we have the best crew and technology to meet all your plumbing and drain cleaning needs. We are as close as your telephone, and competitive pricing is always available. Service is available 24 hours a day, seven days a week. When you call, our office staff will be on the phone for your convenience. You will not have to worry about voice mail or transferred calls. Our job is to solve your plumbing and drain cleaning needs.
BBB Rating
A+
BBB Rating and Accreditation information may be delayed up to a week.
BBB Accredited businesses follow the BBB Code of Business Practices and pay a fee for accreditation review and monitoring. Accreditation is not a BBB endorsement or evaluation of the business’ product quality or competency in performing services. 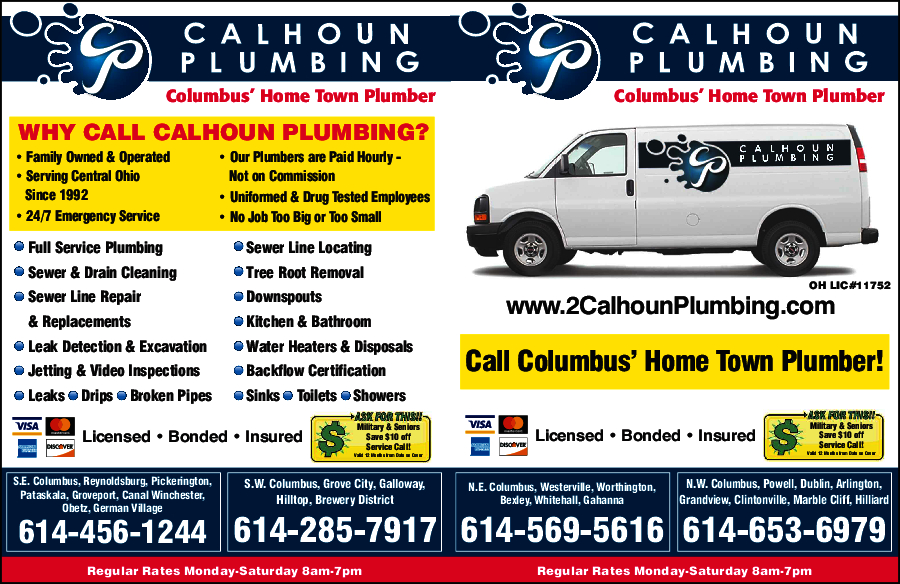 Calhoun showed up when they said they would..very dependable!! They fixed our blocked sewer in no time and had all the best equipment for the job. Recommended!

I needed to have a water meter replaced for irrigation system to meet new Columbus water dept standards. I called Calhoun and they arrived within the time frame, left to get a meter and returned over 2 hours later to install. The Water department came out to inspect and said wrong kind of meter. I called again to tell them the wrong meter. To make a long sad story shorter, they have come out 3 times and now the water meter is correct, but installed BACKWARDS. They scheduled appt to fix and said would call before they came, then called back 15 minutes later saying they would be out in an hour. Great. We were playing/waiting in the backyard with grandchild for over 2 hours, no show. Rescheduled with 2 hour window, but no show within the window. Called again now they refuse to come out to properly correct THEIR installation, for which I PAIDover $850!!
They are incompetent, and rude. DO NOT USE

Called and they were out there the same day. Professional and cost effective prices. Would definitely hire again!

Customer service extremely rude, Called about needing a gas stove installed, told them I had the line already, had the hose, just needed someone to hook it up. While I was trying to explain the situation the man rather then asking me if I could hold or anything simply said he had another call and hung up... I see other reviews below that are good, but if something as simple as a phone call can't be handled, then how can anyone trust their work to be done well!

Mickey and John came out twice on a Saturday, stayed past 7, and did killer work. I haven't had great experience dealing with contractors in the past, but Calhoun deals with you like a real person. If every company handled their business like them I'd be a lot less stressed out. Thanks, again.

I scheduled appointment with Calhoun Plumbing for 8am Saturday 2/23/13, the plumbers did not make it to the appointment until 8:32am, which is stated on the work order. I showed Calhoun Plumbing the problem which was a backed up sewer line which caused poop and sewage and toilet paper to back up in the basement. Calhoun guys said it will take a snake machine, and they will need to go thru the toilet. Calhoun takes an hour to finish job, that was fine. They brought out some roots and made it to us like those particular roots was the issue. I am a female, so I figured it was enough to fix the problem. Calhoun said they ran the rinse cycle to insure the job was fixed. I took there word for it. I paid the $241.00 bill and they left.

Later that night I started to wash the clothes that was ruined from the basement backup, and the back up started to happen again, this time with alot more old poop and toilet paper coming out. This is when the problems start. When I called back to say the problem wasnt fixed, I got into a full dispute with "Trisha, Calhoun receptionist" about the fact that she was going to charge me all over again for the guys to come fix what they never fixed. I told her I will call back Sunday morning, expecting more professionalism. When i called back Sunday, she sent me to voicemail. I call back Monday, still with poop in my basement, and Calhoun Trisha hands the phone over to Calhoun's "Mike", which he goes in a full out rage about how Calhoun is "being nice with allowing guys to come out for 1 hour free." He didnt even let me tell him my concern. At this point I was overheated with the lack of professionalism and lack of concern for the consumer.

I cancelled the check that was wrote to pay for the service. I hired Roter Rooter, I watched the whole process, and the kitchen trash can full of roots and debris come out the hole. I paid an extra hundred dollars for this service, but it was done right, the first time. But I still feel responsible as a consumer to warn about Calhoun.

Michael was at my home today due to a gas leak and I must say he was wonderful, my 4 year old grandson followed him everywhere and asked at least 500 questions and thought he was the bravest because he went into our spooky basement. I felt at ease and knew my gas line issues were being taken care of by a professional, and they were. Thank you Calhoun for sending your best to fix a crazy ladies gas line issues. With 6 grandkids in the house heat and all those other things associated with gas are important. I know my family is safe, no leaks here.

I had these guys come out to look at a leak in my ceiling coming from my upstairs bath. After a quick inspection they noticed very small cracks in my shower. They were very upfront about what they could and couldn’t do for me and gave me every option, including price, ahead of time. In the end they advised me to regrout the shower and didn’t try to charge me for services I didn’t need. I would absolutely use them again.

I had Calhoun Plumbing, Inc. come out to fix my water line. They came out dug up my water line and fixed my broken pipe in one day. They cleaned up all the mess and put down grass seed. The men were very nice and the treated me with respect.

I want to say Thank you.