General Info
The new and pre-owned inventories at Dayton Andrews are fully stocked and awaiting your test drive. If our current inventory doesn't have the vehicle for which you're searching, you can fill out our CarFinder form so we can locate and attain your perfect match. At Dayton Andrews in Clearwater, FL, we strive to put each and every of our customers in the seat of their perfect vehicle, and at an excellent price. This is done with the help of our committed sales staff, financing department and everyone else at our friendly dealership. You'll find the OEM Chrysler, Dodge or Jeep part or accessory you need at the Dayton Andrews Parts department. From radiators to spark plugs to brake rotors to exhaust mufflers, we carry the components that keep your vehicle running strong. Since our inventory is stocked with only factory approved OEM parts, superior quality is always assured. If we don't have it, we will order it for you and let you know as soon as possible when it arrives at our Clearwater, FL store. It's that simple. If you still need help, give us a call. Our friendly staff is more than happy to assist you.
Hours
Regular Hours
Extra Phones 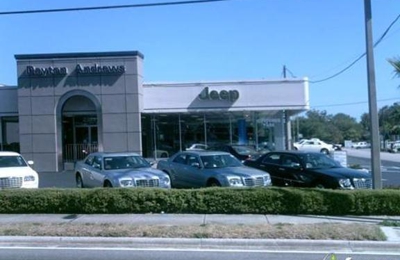 All women beware of Dayton Andrews Jeep service…My wife took her 2008 Jeep Grand Cherokee in because a “service engine soon” light was on. It turns out the battery was going bad. The problem was the scam the service advisor, Mark, tried to pull. Mark told my wife the transmission was low on fluid and needed to be flushed ($180.00). He told her if she didn’t have the flush done now, he would have to flag her car as undriveable. My wife then asked Mark to call me, out of state at the time to explain the problem. Mark then called my wife back and said after getting a second opinion maybe the car doesn’t need a transmission flush just have fluid added to the transmission. By then my wife had called me and I called Dayton Andrews service department and talked with Mark. My question was why they would flag a 2008 Jeep Grand Cherokee with 48000 miles as undriveable when the manual says to simply replace the missing fluid. I got the usual run around, I then spoke with Pete the service manager. Pete said Mark did nothing wrong…In my opinion Pete was in on the scam. I then talked with Charles Flatly the service director who did acknowledge the problem. Bottom line, Dayton Andrews Jeep service scared my wife into ($180.00) unnecessary service with only one option to correct the transmission fluid problem, contrary to the jeep service manual.

Short story is, my car had a broken torque/transimission mount ... and the Dayton Andrews service guys did a tune-up as the fix!

They only mentioned the broken mount after I went to pick up the car and pointed out to them that the loud bumping/grinding noise I brought it for was still bumping and grinding. Then they said "Oh, yeah, the service ticket says there's a broken torque mount." Then they had the nerve to ask if I wanted to leave the car to have that fixed.

Ended up at my regular repair shop (where I should have gone in the first place). They indicated that the mount was so degraded that it was a safety hazard. Could've easily broken and dropped the engine while I was driving.

My recommdation is to avoid Dayton Andrews Auto completely!