Natural Dentistry has not yet specified accepted insurance plans. 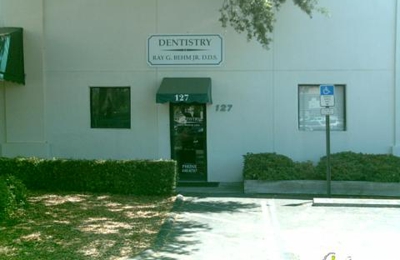 Dr. Behm has removed all the mercury fillings and all old root

years. To me, it is an important step to help the body out. Without

changing anything, as age increases, the accumulation of bacteria and

toxins can more easily overwhelm the built in defenses! I want to

Natural Dentistry office has helped me to do that.

I started with Dr. Behm approx. 13yrs. ago. He truly is the best dentist I have ever gone to. A couple times I tried to find a dentist closer to me but it was not satisfactory and soon I ran back to Dr. Behm. He wants to help the whole person, not just the mouth. And thank you to all his staff - they are great.

My family has been seeing Dr. Behm for many years. We are confident in his approach. Dr Behm & his team are wonderful. We feel it is worth the trip from Tallahassee to Clearwater because we feel the holistic approach to dental treatment has a positive effect on our overall health

I have been a client of Dr Ray Behm's for about 10 years now and feel blessed that I found him. The mouth is often overlooked when creating a preventative health plan. I feel I have benefited incredibly as I have learned so much from this practice. Now I know the Secret....do you.....go to his website and find out..... http://www.behmnaturaldentistry.com/

The staff are fantastic too....they treat you like a person, not just a patient.....

I do many things to stay healthy and this is a huge part of it...all amalgams and metal out of my mouth....no root canals.....use baking soda instead of toothpaste...(way cheaper too)....and I must say, I am not on one single medication and I am rarely sick.....no cold or flu's for years.....and I fly often.

Dr Behm is the best of the best!!!

I wanted a truly Holistic Dentist to rid my mouth of all metals. Dr. Behm was the solution. My immediate need was to replace a crown which had come loose. He worked with me to eventually remove and replace all metal crowns and fillings. Some of the visits were very long, but he and his staff went to great lengths to keep me as comfortable as possible. While he does not accept insurance, his staff willingly submitted claims on my behalf. His office now provides all of our dental needs. The system used to clean teeth is exceptional! It is faster, more effective, and less uncomfortable than any cleaning I have had.

I talked to Dr. Behm about some issues I had and he was able to help me identify what the cause of the problem was and offer a thorough plan to sort it out. He is very knowledgeable and uses natural remedies.

I wanted a holistic dentist as I did not want another root canal and I knew I needed a crown. As the reviewer below said, though I had one tooth that was the problem my appt. was appox. 4 hours and then after many xrays, 3 hygienists, a woman who went over how much my one tooth would cost( ridiculous), I saw the dentist. He then did "muscle testing" to see what fillers they could use in my tooth and which ones I would "react" to. This consisted of putting a product on my belly( through my clothes) and the pushing on my arm.....he called out numbers to his helper. After that I was put in a dental chair to see him and when he came in and took a cursory look at my tooth, and put his hand on my head, he looked at the hygienist behind me and said, " I ONLY touched her head!".....WTH??? I was out of there and never went back. The seating area is also loaded with Scientology info......Freaky office.

After had my appointment, I noticed there was something wrong with the bill. I called back and they refunded the amount no problem (so far, so good). Unfortunately, when I had some pain and discomfort after the appointment, I called and got an answering machine. After MULTIPLE calls, someone called and left me a message (good thing it wasn't urgent). They want money upfront for services and say they will bill insurance after, but after a month, no claims have been filed (and I've called and left a message at the office about it, but nobody has returned that call). If you are in a hurry, this may not be your place. My first visit was about 4 hours long (and there wasn't a problem to fix, just an initial exam). They were more than thorough!