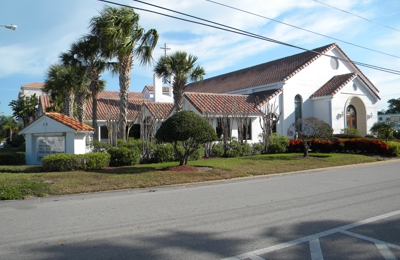 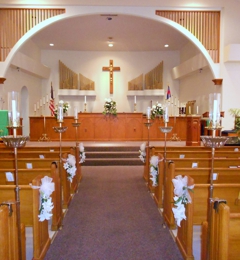 At first it seemed that the Chapel was going to work out perfectly! The co-ordinator was a joy to work with. However, as soon as we met with Reverend Roy Rabatin, I begin to worry. I booked the Chapel in DECEMBER for a June wedding, and was not told until APRIL that the vocalist would not be allowed to use pre-recorded music. He was forced to use the services of the Chapel's pianist, who refused to participate in the rehearsal. The only time the vocalist could practice with her would be ON THE DAY of the wedding approximately 30 minutes prior to the beginning of the ceremony, and we had to pay for "a lesson". In addition, the vocalist was informed on the day of the wedding that he would not be allowed to use a microphone. He had to sing over the piano to a crowd of 200 people without the use of a microphone. And just to be clear, it was not because the Chapel is not equipped with a sound system, it simply was just because the Chapel was not concerned with whether the vocalist was heard or not.

Also in April, I was informed that the cost of the videography was going to be $350 instead of the agreed upon $300. And also that the wedding party would not have access to the bride and groom rooms until 4:30p (the ceremony was to begin at 5:15p) instead of at 3:00 as agreed upon in December! (We ultimately got use of the rooms at 3:30).

The rehearsal was a disaster! The way Reverend Rabatin treated the participants was appalling! He walked into the Chapel, did not introduce himself or welcome everyone to the church.... he simply started barking out orders. He rushed through the rehearsal and made people feel stupid for asking questions. I was so caught off guard by his behavior and attitude, that I did not notice until the day of the wedding that he had forgotten to rehearse with the mothers the lighting of the alter candles, and therefore, although it was listed in the program, that part of the ceremony did not take place. Instead the staff lit the candles prior to the start of the ceremony. This was only one aspect of the ceremony that had been planned and agreed upon by the Reverend, bride and groom that was completely disregarded.

His mistreatment carried over into the wedding day. He made things very difficult for the photographer by refusing to allow him to get any closer than 10 pews to the alter. The photographer missed out on many classic photos. In addition, the Reverend thought that it would be sufficient for the photographer to take photographs of the processional, from the BACK of the church, so that instead of getting pictures of faces, you would see backs... How ridiculous!

The pianist did a poor job of playing throughout the ceremony. There were several times, including when the mothers were being seated, that there was no music being played at all!

Although the Chapel advertises "Our staff is committed to making your special day a beautiful and joyful occasion from your first meeting with our wedding coordinator to the final vows. Our wedding minister will work with you to create a ceremony that fulfills your every wish", that unfortunately was not my experience. Reverend Roy Rabatin should have gone out of his way to make our day as smooth and stress-free as he could. However, as it turned out, he was the only thing we were stressing about! As a fellow Christian, I am embarrassed by his behavior. He definitely did not set a good example for any non-believers who may have been present….

Fortunately, I am blessed to have wonderful family and friends who went out of their way to overlook the negatives of what was taking place and focus of the true meaning of why we all had gathered together in the first place! In spite of the Reverend's efforts to damper the mood and atmosphere, we had a beautiful wedding!! It is a shame that a man of God has forgotten the importance of a wedding day, and has instead turned it into a business......