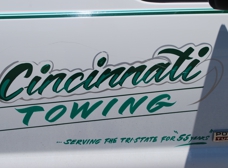 After calling five other towing services that claimed 24/7 service. They answered, communicated well and showed up to help us on a Sunday. Highly recommend!

horrible people! I stepped out of my car for a few seconds to get some change to feed my meter and when as i was walking back, this person was getting ready to tow my car. i explained that i was about to put quarters in the meter but instead, he wanted me to give him $50. i begged and pleaded because i am 6 months pregnant and it was about 38 degrees cold at night but instead he called the police. the police came and explained that it was the law that i would have to pay. so i agreed to pay $50 but the guy named Bob said that offer "is off the table" because i refused initially. i then offered to pay the full amount of $110 on the spot but he said no and still took my car. luckily my friend was there and she drove me to their shop and gave them a call. they made me wait 25 minutes before they showed up and took me to their underground garage to get my car back. I am not from cincinnati. so i am not familiar with the area. i am 6 months pregnant and both me and my friend were females. this guy totally had no compassion. even if i was willing to pay the whole amount of $110 at the parking lot instead of having to go search for their shop late at night. Rude and disrespectful people!

Horrible service. I've been waiting to get my car for 2 hours after a wrongful tow. And the guy I talked to had horrible customer service.. Wouldn't recommend this business to anyone