BBB Rating
A+
BBB Rating and Accreditation information may be delayed up to a week.
Hours
Regular Hours
Services/Products
Payment method
all major credit cards
Neighborhood
Finneytown
Other Link 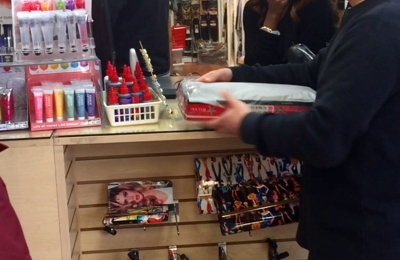 Can't try any of the lace samples on and the lady that works back here is really rude. Not helpful at all

Black people should never shop in this establishment. They don't respect or treat black people in the proper manner. My mother bought a wig and the wrong color wig was in the box. The employee got the wig and it wasn't ours till we paid for it at the counter. She didn't open it till she got home. They would not take it back for a exchange of the right one. Even though the manager told us he would exchange it after we called. Also while there to exchange it she bought 2 lip glosses. We never left the store and after we found out they wouldn't take it back, I tried to return the lip gloss and he would not take it back saying that it had no seal. But the kicker is we never left the store or his side. He was just being spiteful lol. I have all this on video tape. Also the black girl behind the counter sided with us until her manager boyfriend change his mind. I guess sleeping with the boss has its privileges. Hope his wife doesn't find out. Those Asians think all black people steal & lie