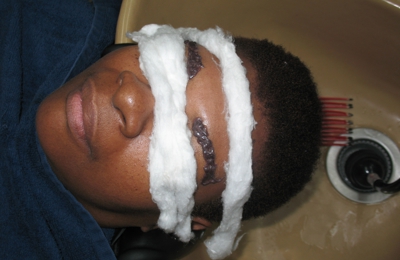 WARNING: STAY AWAY . MISLEADING PRICING POSTED ON WALL $148.00 for a cut, wash, and flat iron, ( he cut one side shorter than the other and there is no style it looks like someone placed a bowl on my head and cut around it). It took 5 hours.

At first it seemed as if he may have known what he was doing. Steam was something new. But I should of known when he rinsed the conditioner out with more hot than cool water to lock in the conditioner, to get up and walk out.

The blow drying process was torture, he nicked me with heat twice (but he claims to not burn). The flat Iron process felt like he was pulling seperate strands of hair out from other areas of my head. I'm the idiot for not getting up an walking out.

When finishing up he tried to use the clippers to tighten up my edges(forget about it) . I REFUSED! I didn't like my hair, I sure wasn't going to be any dumber than I already was.

This fool dropped an $148.00 price tag on me. 😱. I asked for what then he pulls out pricing sheet that is kept on a magazine rack.

This Man claims to know God! SMH, obviously not, but he will by the time this karma rolls back around on him.

Its 7 am 11 hours later and my head and scalp hurts from how aggressive he was on my scalp. ... On a positive note he massages the scalp.

THIS IS AN HONEST REVIEW, TAKE HEED!


FEBRUARY 08.2015
Lakita H. , was in my salon on January 31,2015, more than thirty minutes late for an 8:30am. appointment.
she appeared intimated when asked her to put on a client gown to cover her clothing, she selected a gown obviously a few sizes too small and proceeded to put it on as one would a hospital gown. I suggested to her another gown might be a better fit, she appeared overly agitated with the suggestion as she insisted "this fits fine".
Through out the service her questions and admission of limited professional salon experience shown through the condition of her hair which she admitted to shampooing less than 26 times a year.
She could not remember the last time she had a trim or hair cut as she reported it was three weeks since her last shampoo, however it appeared considerably longer, which explain the excessive amount damage and split ends to her hair.
When I presented her with the bill of $71.00 for two shampoos, a steam hydrating conditioner, a hair cut and a steam flat iron press. She began to pick and choose what she would and would not pay for.
It became obvious to me she had no intentions of paying and or could not afford to pay.
At this point I asked her to leave my salon." she paid nothing" and appeared delighted.
LAKETIA H. "BAD FOR BUSINESS."
Banned from MRJERRYS HAIRSALON.
Jerry L Rogers, founder and owner.

I completely agree with the previous post about the customer service. Mr. Jerry charges you for every aspect of service. Get a price B4 the service or you will find yourself paying more than expected. Also back to the customer service...his attitude is very arrogant & self serving. Unless you are a older client he comes across very arrogant. I went in for a "scheduled" appt & after waiting almost 1hr he had the nerve to say I was the hold up & never offered an apology or have cocern for my wait time. Customer service relations is necessary to sustain any business & the experience at Mr. Jerry's does not convey this at all!