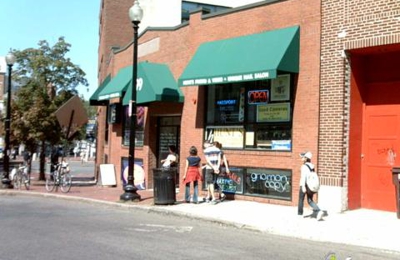 I'm not a photographer but I do digital art. I was looking for someone who was good with printing professional quality digital prints for artists.

I didn't know much but the salesman was very helpful and gave me a good quick education into the things I needed to know about printing. I had a usb thumbdrive which their printer wouldn't accept. He opened a flash card, transferred my pictures, showed me how to print them out and then critiqued the print. He told me what I'd have to do to get a professional quality art print from my original.
I only spent a few bucks on their printing machine but I got a lot more than a few bucks work of information.
The only reason I can't give it 5 stars is that it's a photo store and I went in with digital art....not photos. Things might be different with photos but I rather doubt it.

The salesperson I dealt with at the Harvard Square location was very deceptive. I would never shop there again.

On 11/18/2006, I bought the Canon TC-80N3 electronic remote release so that I could take pictures of the Leonid meteor shower that night. I was somewhat hesitant, because the price was over $40 more than online stores and there was a chance that the skies would be too cloudy for any good pictures. I decided to buy it and return it if I ended up not using it.

Before I paid for the item, I explicitly asked the salesperson what their return policy was. He told me that I could return it within 7 days, as long as I had the receipt.

Well, as anyone from Boston can tell you, that night was very overcast and cloudy--absolutely no possibility of any meteor viewing. I ended up not even removing the remote from its bubblewrap.

The next day, on 11/19/2006, I went to return the remote. The same salesperson handled the transaction. He asked me how the remote was, and I told him that I hadn't used it because it was too cloudy the night before. When he processed the return, he told me that there was a 15% restocking fee.

Well, this annoyed me because he hadn't mentioned this the day before when I asked him about the return policy, and I told him so. He then proceeded to insult me, by saying, ""Well, you were going to return it even if you had used it."" No, if I had used it, I would have kept it.