General Info
Since 1972, it has been the mission of C & C Sports to provide superior quality service, the best value for our customers and an exceptional purchasing experience that will have them returning year after year and referring their friends to us. We support and encourage family fun. We desire to have a good name in our community, hire the best employees and strive to deliver excellence from every corner of our company. Our customer is the most important person in our store. Our customer is not dependent on us – we are dependent on them. Our customer is not an interruption of our work – rather the purpose of it. We are a leader in our industry and provide the best products available to our customers. We sell fun! It's our goal to make sure you enjoy our products every day. We promise to do business with good character, ethical and moral values, to have positive attitudes throughout our company and to help our customers have fun while they live their life In the fast lane.
Email
Email Business
BBB Rating
A+
BBB Rating and Accreditation information may be delayed up to a week.
Extra Phones 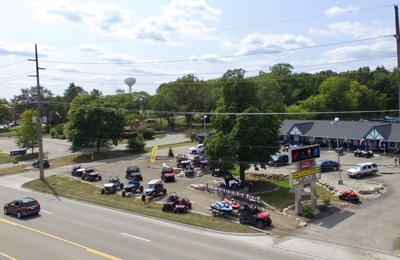 First & LAST time going to this dealership. They gave me the old bait and switch winterizing my 13hr SeaDoo Spark Trixx. From preforming tasks you specifically ask them not to do (potentially causing damage), not preforming tasks you paid for (causing damage), damaging your car while trying to hook your trailer back up, finding your foot padding saturated in oil, oil left on the body, to having the service manager (Josh) yell at you over the phone and hang up on you mid conversation… Moral of the story: Don’t take anything here for service! If you value your money and machine, I would strongly suggest finding another dealership as I unfortunately learned my lesson the hard way. Don’t make the same mistake, because once they have your money, you won’t be getting anything resolved!

I have been coming to C&C Sports since I was a little kid! They are always willing to help me out. Parts and Service is great with fast turn-around and the sales team has always taken care of me. I just got a great deal on a used Harley Street Glide from their used store off old 23 in Brighton!

Took my ATV here for repairs. It was an insured vehicle and they went overboard with gouging the insurance company. The vehicle flipped several times and damaged a few things but they replaced items that did not need to be replaced and didn't replace other items that needed replacing.

Communication was pathetic.
Amount of time to get it fixed was horrible.
The insurance adjuster was very unhappy with them as well.

Poor quality of work as well. I'm an automotive technician who takes pride in his work. These people did not.
Brand new battery was shorted out, reverse gear servo doesn't work now and the new body they put on was loose with the fender lips flopping around. (no joking)

I WILL NEVER GIVE THEM A PENNEY OF MY BUSINESSS AGAIN!

Purchased a new 2015 CanAm Spyder during a phone conversation with Steve on March 7, 2016, sight unseen, we put a $500 deposit down and would be picking it up on March 12, 2016. Drove down on March 12, 2016, picked up the Spyder, everything completed, paid $19,000, all one hundred dollar bills, to Dave P., finan. person. He gave us the temp plate, good for fifteen days. On March 26, 2016, we made several calls to Dave. none of which were returned. Our plate had expired. He finally sent a text advising it would be mailed out, snail mail, USPS, Mon., March 28, 2016. I requested to have it shipped overnight. He didn't know what that was. To date, March 31, 2016, no phone calls returned, no plate has been received, no communication whatsoever. If you're considering this shop, I'd error on the side of caution. NEVER AGAIN.
UPDATE: April 5th, 2016, No phone calls returned. No plate received..

Almost 1 year ago re rebuilt the top end of my son's '99 KTM 50 cc, we came to C&C for parts- they are supposed to be the professionals right?! WRONG- we were sold the wrong piston, thinking that the person at the parts counter knew what the were doing we replaced everything from the plug to the stator. After almost 1 year of hassle with this bike not knowing why it doesnt run anymore we reluctantly took the bike back to have their techs to diagnos the problem. A week and a half later they decide it has the wrong piston in it!! Because they sold us the wrong part- oh but their excuss is even better- their parts book has the wrong info! That would mean that every shop with that KTM parts book has a wrong book-whatever.

Of course after paying a diagnosis fee and buying yet another new piston and new jug (which they say we got at cost-yeah right!) AND paying them to put it in...bring it home ran less than a 1/4 mile down the road and quit...STILL DOESN'T RUN. Call them back to see what the &%^&^, well it couldn't be anything they did wrong! So we bring the bike back AGAIN, now they have no idea what is going on, and have no initiative to call KTM directly.....so I pick the bike back up- IN PIECES- they didn't even bother to put it back together- like it was when it was dropped off....

I will never take the word of any of their parts people or mechanics again, never will I buy anything, parts or otherwise, from these idiots...kiss your money goodbye with these jokers, DEFINETLY NOT WORTH THE HEADACHE AND ESPECIALLY NOT WORTH A WASTED $500 for a bike that still doesn't run.