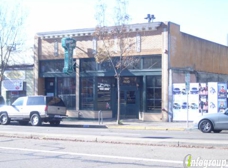 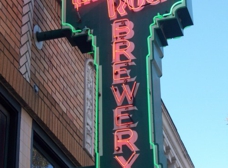 Food poising, exceptionally rude customer service from a busser, and a stolen jacket, I'm not returning.

All the graduate students rave about Monkey Head, which is indeed very good. After the last two times I've been to Triple Rock, however, I'm very unhappy. The first of those two, i went there and became ill after eating burgers with friends

The last time I went there I went there because a friend was leaving town and we gathered there on a Thursday to enjoy some Monkey Head. As people were ready to go, I still was nursing a nearly full pint of beer so I decided to stay and finish it off before I left. I said hello to the table next to me and we exchanged pleasantries about the weather, etc. As I turned back around my beer was gone and I asked the busser clearing the table if my beer might have been taken by mistake and that I was still drinking it. She became very defensive and accused me of not putting something covering my drink to let her know I was saving it. I told her I never left my seat and just turned to say hello to the table next to me. She became very rude and told me she had every right to take it. I asked if I might be able to get a replacement. She told me no but I could go ask my server. So I went up to the server Mischa, explained what happened, and she was very nice and gave me a half pint replacement. I went over to the busser and asked her name. She responded, ""Why?"" I told her I wasn't satisfied with her customer service. She told me she wouldn't tell me her name, and that if I wanted to talk to her manager that he would defend her no matter what. I told her if she didn't tell me her name I thought it would look even worse for her. ""Isabella!"" and she went over to the server who had given me a replacement and they began to stare at me and talk about me. I felt very uncomfortable and walked back to the table where I was sitting and noticed my jacket was gone from the chair. I'd only seen the busser around the table. I didn't see her take it but I suspect she did. I asked the bartender if anyone turned anything in, looked all around for it, and it wasn't found. I've returned twice to see if it's in lost and found and it isn't.

I've been a server for 4+ years and I realise mistakes happen. I believe the proper way of handling it would have been to just say I didn't realize you were still drinking your beer. Let me get you another one. Instead I got treated rudely, a jacket stolen, and a bad impression of the staff working there.

When I emailed the manager to complain about the situation, he didn't respond, which further illustrates poor customer service!

I am from the East coast, and my alma mater is Syracuse University (Go ORANGE!) I stopped into Triple Rock to grab a burger, and catch the NIT on their flat screen tv's. To my surprise the menu at Triple Rock offered Buffalo Wings which tasted just like the wings I used to eat back home. The bar was celebrating a 21 year anniversary as well, and the 'Cuse got a win against South Alabama. All & all it was the perfect pub experience, and I will be going back for many days during MARCH MADNESS!

The beer quality is not very high. You can easily get better beer for less in Berkeley. But perhaps the worst part of T-Rock is the service. I eat out a lot and I have been to T-Rock probably 30 times (it's close to where I live) and the service is absolutely horrible. The wait staff can be rude, they are ridiculously slow, and they often give you information about the menu or beer that is just wrong.

The beer is overpriced and not consistent. The waitresses sold us big mugs telling us we could refill them for a discounted price. We went back and the bartender blew us off. The kitchen typically closes about 10 to 15 minutes before it is scheduled to. I've even been there waiting for people and asked the waitress when it closed. I then waited till 12 minutes before closing as my friends just arrived and they annouced that they closed early. They could of at least told us that they were closing.

For someone like me on a, uh, budget -- Triple Rock is the place. A bunch of the microbrews are only $2.75 a pint, you can't beat that price. Other places in Berkeley are usually a buck more a glass. The house beers pack a whallop, too. The food isn't cheap, but you get a lot. The nacho plate can feed an army. The pub has a classic, old-style look. Comfortable. The service has been good for me.

The food here is just OK (but the nachos are great) -- it's the beer that's terrific. If it's sunny, head upstairs to the little patio. But you're not here for sun, you're here for beer. Relax and enjoy.