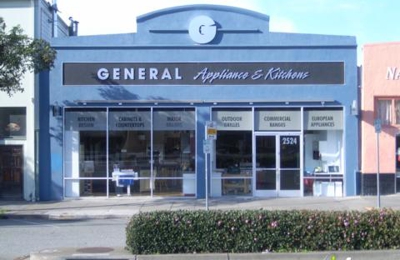 I purchased a KitchenAid 3 door Frig. Was delivered with two dents. There was no answer at AA when we called to take action. So we accepted the frig. Since the dents were in the doors, which could be replaced. Big Mistake!!!

However, my house is not. They scratched the doors, walls, floors in multiple locations. The only thing they used to try to protect my floors was a very thin sheet of cardboard. The wheels cut right thur it and damaged the hardwood floor. All told about $1000 in damage to my home from their poor delivery.

Airport Appliance's response was, we have insurance sue us!!! There is absolutely no follow-up on their part. Carol the manager, will never call back. Claims the doors have been ordered, that was more than a month ago.

Save yourself a lot of pain and frustration, purchase your appliances from somewhere else.

I was so surprised to see any negative reviews for General Appliance. They have great knowledge of the products they sell; their kitchen designer is faulous; and the general contractor she recommended (GF Watson Construction & Painting - Greg Watson) was fast, clean, honest, and gave great attention to the details. I love my new kitchen and the quality cabinets and appliance that I had a hard time finding elsewhere. The last time I remodeled a kitchen it was with Home Depot -- NEVER AGAIN!!! Maybe my bad experiencewith Home Depot made me appreciate General Appliance more -- but whatever. . . I think they're all great!

It's been seven years since we purchased appliances at GA: Refrigerator, stove top, wall oven, dishwasher, g. disposer, and range hood. Unpacking the oven we found it had been dropped. Enamel was falling off the interior, the whole unit was skewed so that the rack never slid. GA and manf.stonewalled. No recourse. Then chips of enamel started popping off the cooktop flame deflectors. Same tune, except that we ""must have abused the parts""(!). Good news is that after a mear seven years of use the oven totally conked out this week, so we get to purchase a replacement from some other dealer! Nice sales job. Negative stars.

unbelievable ""customer service"" --
take my money, give me a faulty product, make me jump through hoops with the manufacturer even though it is not their fault, give me a runaround for months, keep my money, do not return phone calls, threaten me on the phone.

I'm not sure how nice people can be unemployed while jacka$$es like Don (the owner?) and Pat (salesman) can stay in business. hopefully some day their own bad behavior will bite them in the a$$.

THIEVES AND LIARS DON'T GET MY BUSINESS

Without a doubt, this company not only has knowledgeable and caring salespeople, they offer everything the big box stores have and more. This company has been around forever, and looking at their reviews 30plus years of business and no more than the complaints written on this blog- these customers must be screwballs- I furnished my entire kitchen, with cabinetry and appliances and have recommended General Appliance to everyone in the home remodeling field. Try getting the expertise and service from the big box stores- Letticia and Mr Malone helped me through the remodeling process without a hitch- both have many years of experience. I highly recommend this store on your shopping list........................

We purchased (at full price) a Bosch dishwasher from General Appliance in Berkeley in early September. Our plumber picked up the item from the warehouse, it was without it's original shipping box. He took the dishwasher with the caveat that if it turned out damaged, we wouldn't accept it and could return it. At home, we removed the styrofoam & cardboard packaging, the outside appeared to be fine but after installing it, a dent in the front panel was evident. I called General Appliance right away and asked if they would give us money off for this damage. The Director of Sales, Todd Malone, said no he couldn't do that , but that he would call the warehouse & have someone come replace the panel. Upon using the machine, I found that the lower tray was very difficult to slide in & out of the machine. I had to call a few times to General Appliance to get a service repair person out to our house. He asked if there were any other problems; I told him about the lower tray & he said that dent inside the tank could not be repaired. The machine would need replacing to correct for that. He called both the Bosch manufacturing office & General Appliance. Bosch's stance was that we, the customers, had to contact the retailer, General Appliance, and have them take care of it. I have called the Sales Director and the Warehouse, at least once a week, often more, since we bought this machine and each person says they will call someone to take care of this and have promised to call us back within 1 -2 days, regardless of what they find out. Of the 10 or more calls I've made, we have only been called back twice, not each time as promised. The dishwasher hasnt' been replaced or our money returned. My next calls are to Consumer reporters for the Bay Area news stations and Small Claims Court, and going to the store to say out loud how we want to return the machine & get a refund. VERY BAD customer treatment!

We ordered Diamond cabinets from this outfit. They lost 3 cabinets, didn't expdite the replacement order- so it took them 3 weeks to deliver replacements instead of 1 as it should have (I learned from their regional dealer rep). 1 of the replacement cabinets was ordered incorrectly- so we got the wrong cabinet and had to wait longer. They didn't know what was in their warehouse or when it arrived. Through it all they blamed everyone else for their errors. We ended up with a 6 week delay in our project- no kitchen, increased contractor expense. Look elsewhere for Diamond cabinets (the cabinets are great)