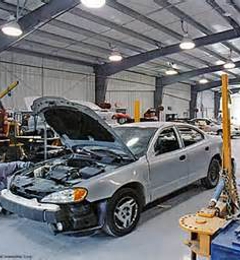 My car's radiator went out in the middle of a busy week. I had countless errands to run and now my car wasn't going anywhere. I went directly to A&M auto repair shop. They fixed my car the same day. A&M auto repair was a life saver for me. I received fast and friendly service that was beyond what I expected.

The day I was suppose to be leaving on a road trip, my car started making an unusual noise. Before leaving I visited A&M auto repair shop for a complete inspection. They fixed my car and assured me that my car wouldn't break down on my trip. I was so grateful that A&M could repair my car within hours and I could still go on my trip.

I had this business do some major work on my truck

The truck runs Worse after they worked on it than before. They also wanted to pad their profit by including unnecessary work.

A & M is the only automotive shop I will ever go to. I know ill always get an honest diagnosis for any problems I may be having with my car.The mechanics are always friendly and happy to answer any questions I have. Ive referred everyone I know to this shop including my boss, co-workers, family, and friends and all have become long term customers. I have had great experiences each time Ive been here and feel like part of the family every time I walk in.

Went in for an estimate on some work for my 2001 Honda Accord. I was completely caught off guard by the quote I was given. It was $500 less then what the other shop I went to get a quote from gave me. A&M got my business! Great work too…

I had been using another auto repair business. I did a search on the net and found A&M. After talking with Paul, I immediately made an appointment for my car repair. He was knowledgeable about my repairs, and could give honest quotes. Run don't walk to this business for your repairs.

I just got off the phone with one of the employees, Paul, and he was amazing.

Although we didn't take out car there, he was so honest with us. He let us know our warranty was still effective and he directed us in the direction of the dealership to save us some money. What an honest company!

They fixed my car correctly and they did so on the very first time, which I think should be expected. But clearly this is not always the case and I know this firsthand because I went to 3 other places before finding them and spent a lot of money but my car st. They took care of it in 1 day and I have not stalled out since. They told me what was wrong and fixed it without padding the bill and telling me I needed everything under the sun. I spent about half what I had spent at one place alone, and this time the car was fixed! I wish I had found them first. They treated me with dignity and did not try and talk down to me. Every woman who has ever had any issues with a mechanic should come and see these guys - I am a very satisfied customer.

I have a friend who works at a local repair shop try to fix the brakes on my Mustang. After not even 1800 miles, the brakes started pulling a lot. I was pretty disappointed and took it to A&M Auto where they explained why they were pulling and how they were not done correctly originally. They replaced a faulty caliper and the 3 brake hoses which had bubbles in them and about to burst. So I am really pleased that they were able to fix the problem and the hoses since my friend was not able to. That is very important because if one of my hoses fail, I can lose my brakes.

My car had been at two different shops before and I spent nearly $2000, but it was still not fixed. Someone at my church referred me to Paul. I had my 05 Jeep towed to him and in less than two days he called to let me what was wrong. He replaced the car harness and it has been over a year and it's still going strong! The other 2 shops I went to were only slightly less expensive, but they didn't even fix the problem and were a complete waste of money. Paul is the best I have found in my area, and I have tried many!