General Info
We are a BioGuard and SpaGuard Platinum dealer focused on customer satisfaction. We use BioGuard's exclusive ALEX software for in-depth water analysis. Bring in a water sample for analysis using the fastest and most accurate water testing system in the industry.
Email
Email Business
BBB Rating
A+
BBB Rating and Accreditation information may be delayed up to a week.
BBB Accredited businesses follow the BBB Code of Business Practices and pay a fee for accreditation review and monitoring. Accreditation is not a BBB endorsement or evaluation of the business’ product quality or competency in performing services. 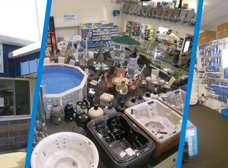 I appreciated John, his crew, and the owner. I also appreciate Tom Ladow. I would recommend them to my friends/family in the market for a pool.

Simply put, the staff members at Blue Dolphin Pools are fantastic. They know what they are doing, and are very knowledgeable. I have called them with questions tons of times.

They always have the chemicals that I like to use on my pool. I can always count on them for that. I will keep giving them my business.

They open our pool and close our pool every year and they do a nice job. They always come when they say they will. It is nice that they are so dependable.

The staff from Blue Dolphin Pool was excellent. They use quality material and build solid pools. Plus, they followed up with us after the installation to see how everything was and how we were liking it.

I like that the staff from Blue Dolphin do their own installations (whereas some contractors we looked at sub contacted this out) and handle all sub contractor (electrical and concrete) work for their customers. I feel the Blue Dolphin crew and their suppliers went over and above our expectations during the install process.

Blue Dolphin Pools & Spas Inc built my fiber glass pool three years ago. Everything has been wonderful. They handle the yearly closing and yearly opening of our pool. I like that they do it all for me.

The quality of work that Blue Dolphin Pools & Spas Inc is excellent. I would highly recommend anyone get a pool built by them.

I called and had a question about a Automatic Pool Cleaner (Aqua Bot) and talked to a guy named Chris. I explained to him the issue and he diagnosed the problem over the phone. I decided to bring it in and have him repair it the same day. I dropped it off and two days later it was done. All I can say is whatever he did to it made it work better than when it was new. I have read other negative reviews about Blue Dolphin and have to say I did not have the same experience. Chris mentioned he was new, so maybe they cleaned house and are under new management? Either way, if I have a Pool Cleaner or Pump I need fixed I will be definitely going back to see Chris.

P.S. The only reason I am giving 4 stars is because when I did go in there I did run in to a guy named John, he didn't give me the time of day and was extremely rude to me and me husband. Other than that everybody seemed pretty spot on.