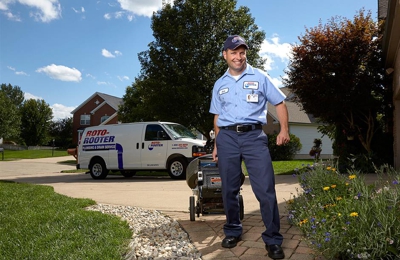 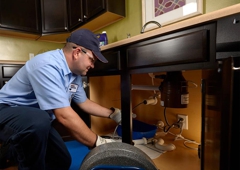 Dama Fanai was very professional. He was prompt, he took care of my problem, and he cleaned up the area very nicely. I appreciate him very much. If I ever have another issue, Roto-Rooter is the 1st I’m calling. So happy!

Delroy #2386 has been consistently on time and professional in every encounter I have had with him so far. Would recommend Roto rooter plumbers. They have honored the warranty on a leaky pipe in my house and I will keep using Roto rooter. Thank you delroy for the always pleasant experience.

Roto-rooter stands behind their word. I had a problem with my shower & explained the situation to the manager, Jason Nelson, who promised to stay on top of things. The 2 techs that were sent out--Purcell (ID 3755) & Kristina (ID 6067) were great--punctual, knowledgeable and friendly. I had to have my shower problem addressed twice prior to them coming out--once for the cold water and once for the hot. The 3rd time, it turned out that there was a problem with the shower head, but because to resolve the previous problems Roto- Rooter had dealt to some extent with the shower head, they said they would take care of it. Other companies might have charged me for the 3rd visit. It's no wonder they have built a stellar reputation as a national company.

I have always been pleased with Roto-rooter. Three years ago, they came when I had a sewer line break - they did the cleanup and the excavating division replaced my sewer pipe. They are always prompt. Yesterday I had a leaking hot water heater and they were the only company that I called that would come out right away. The hot water heater was promptly replaced. The technician was polite and friendly.

Prompt and courteous service. Sailo and Joseph were excellent in attending to our problems. I highly recommend their service.

Excellent same day response. Technician, Chris, was highly qualified. Communication with the service department was very impressive. All work performed was completed in a timely manner and I'm very satisfied. This was my first experience with Roto-Rooter. I would not hesitate to contact them for my future plumbing needs.

Purcell 3755 is a excellent tech with a can do attitude , he quoted me the cost and got to work. I was pleased with the service and the results. I would recommend Roto Rooter and Purcell as the tech.

The man obrian that came to my house was absolutely wonderful, he arrived at my house 30 mins early and dis so great, price was great to

I had an issue with a clogged drain in my basement, which two other plumbers were not able to resolve. Christopher came at 6pm on Friday, made the right diagnosis and fixed the issue in two hours. He was courteous and professional.

Came promptly, within a couple hours.
Were very professional and businesslike.
Cleared the stoppage.
Found a foreign object 40’ down our main drain.
DID NOT TRY TO PULL IT OUT!
Claimed we have to excavate to remove it?
Will seek a second opinion...

They were very prompt in helping me look at and diagnose my plumbing issues. They were also able to fix a couple of the problems on the same day

Andrew tech # 1492 arrived on time and made the repairs quickly and cleanly. I would highly recommend.

Jacob #4534 was fantastic! Thank you!! He was on time, professional, friendly and fixed the problem.

Pam D I called them ad a result of carpet installer putting a nail in the main water line. They sent someone in less than 30 minutes to fix the problem. He did a spectacular job! Thanks for the prompt and courteous service.

We just got service from Rotorooter for our basement toilet. Tech came promptly, gave estimate and started work right away. We had to replace an ASCENT II maserating toilet system. This was a difficult job. The tech from roto rooter did a great job. Was patient and helpful even though the job went a little beyond his estimate. The tech was Khiangte (#7909). Will be glad to have them back for similar difficult jobs that we might have.

I was pleased with my service. The Tech was great. My only negative response was the pricing which seemed to be "high". It appears that Roto Rooter has 2 sets of pricing. One for new customers and one for customers who have used Roto Rooter before.

On Preakness Saturday afternoon my plumbing backed up. I called Roto-Rooter and a very nice young woman (Jenay) said a repairman would be out in an hour and sure enough they were right on time. Greg Thompson #8288 and Quintin#2586 did an excellent, professional job and were friendly polite and courteous. They made the repair in an hour or so, and they knew exactly what to do. They also cleaned up thoroughly afterward, even moving furniture back into place. Within 2-3 hours from my calling, the repair was completely finished, just in time to watch the Preakness ! Thats as good as it gets ! I wholeheartedly recommend this company to anyone in need of plumbing service.

Excellent service. they called before they came and I was able to get an appointment right away. I was bit shocked by the price of $628 to snake two of my tub drains but Jeff said it's guaranteed for 6 months.