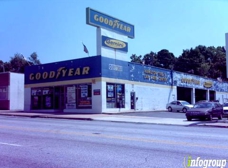 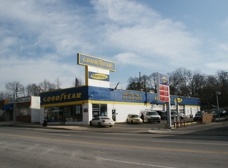 This place has poor customer service and poor management, never go here unless you want problems. I was a customer here for quite sometime until I took my 2001 Range Rover in for service. I received a call from the shop owner Jay saying that my truck was put on a lift that it wasn't supposed to be and 1 of the air suspension bags was damaged. I immediately went into the shop and upon my arrival, Jay told me that he put the air suspension back together and everything was working fine. Jay then showed me that someone had put putty or silicone on the air suspension and that there must have been a problem with the air suspension before I brought it in to the shop. I ordered a new air suspension off the Internet and took it to another shop and had it put on. I didn't go back to Hamilton Goodyear for a few years after that. I needed the oil changed on my 2002 Chevrolet Tahoe so I took it into Goodyear figuring I'd give them another shot with something simple. I walked up to the counter and asked the guy behind the counter how was he doing and he replied how may help you. I told him I was there for an oil change and they did it. On my receipt it read that they completed a 3 point inspection on my truck which included checking the tire pressure and topping off my fluids. The next day I noticed that I had no window washer fluid in my truck so I went back to Good year so they could top it off. I was first told that the mechanic was out to lunch and then told that they were out of window washer fluid and that's why it wasn't done and 2 days later this shop still had no window washer fluid. I called the owner to complain and he offered his apologies and told me the guys in shop are supposed to let them know when it's getting low so more can be ordered and they hadn't done so. He then said that they now had it in and I could bring my truck back and they would top it off. If I did so that would've made my 3rd trip to this shop to fully complete 1 oil change and that's just unacceptable. I wasn't offered any other incentive to show how apologetic they were or how much my business was appreciated. I elected to go and buy my own window washer fluid and top it off myself. I will be going back to Firestone for my next oil change, I don't care how long I have to wait at least I get a friendly greeting and it's done right the first time.

I was impressed with the service at Hamilton Goodyear. I had problems that three other shops could not fix. They told me that a loose connection caused my misfire and check engine light. 3 weeks later, They fixed my car..... They are honest and experienced, And very helpful......... I will send everyone I know There.

I brought my Mercedes here The first time for service and they were half the price of what the dealer wanted. Jay told me that they had a factory trained Mercedes technician and that they use original Mercedes parts. They did a great job. I just recently came back because they gave me the best deal for four new tires. Believe me...I shopped around! I would recommend them to anyone.

I have a 2001 Mercedes, and my wife has a 2004 BMW. Hamilton Tire has Factory trained technicians and Original parts. They showed me the Original German Full Synthetic oil that they use. They do all of the factory maintenance services. I have saved almost half of what I would of paid when I went to the dealer. Best parts, Finest service. Why should I go anywhere else.

I have had my car to 5 different shops with a Check Engine light and it ran rough sometimes. No one could figure it out. I spent over $1,000.00 to try to fix the problem. Hamilton Tire was recommended to me from someone I work with. Boy, Am I glad I found them.