Installation and repair since 1925

General Info
In 1925, The Lawrence Glass Company started in business manufacturing and installing steel sash products in Los Angeles. In the next few years, as the window industry changed and the demand for steel sash diminished, the company diversified, the name changed to The Lawrence Steel Company, and transitioned into a manufacturer/installer of roll-up doors. Even in its early years, large projects with large doors became a common occurrence. An example of early successes was the Matson Terminal project, which included 89 doors of various sizes up to 40 ft. wide.Always with a focus on credibility and professionalism, Lawrence obtained its first California State Contractors License shortly after the State Board licensing requirements were established in 1929.After eventually becoming The Lawrence Company, it was incorporated in 1988 as Lawrence Roll-Up Doors, Inc. As opportunities and the demand for service increased, local service centers were established. Lawrence Roll-Up Doors, Inc. continues to operate as a third-generation family business.Lawrence acquired the assets of Criterion Gate in 2000 and the assets of Pacific Rolling Door in 2008. After decades of growth and expansion on the original Lawrence property in Los Angeles, and with another site for the Criterion folding gate operation, in 2004 Lawrence consolidated all manufacturing and corporate operations into a new facility located in Baldwin Park, California.Today, Lawrence Doors operates multiple service centers throughout Southern California and Southern Nevada, strategically located to provide quick response to customers in those regions.
Hours
Regular Hours
Payment method
all major credit cards
Other Link 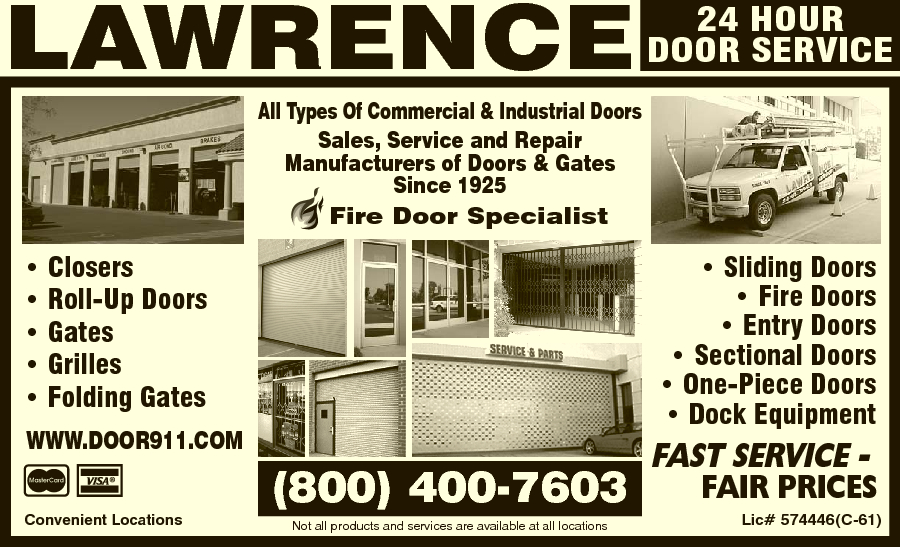