General Info
The maintenance of your car or truck engine and transmission is one of the most important things that any vehicle owner should consistently schedule for service. At Pronto Engine and Transmission, our ASE Certified mechanics provide skilled, professional engine and transmission service and repair for Austin Texas.There is no engine repair or engine service job that is too large or too small, and we service most vehicle makes and models. We perform any auto repair or service including transmission rebuild & repair, auto air conditioning repair, brakes, tire repair, auto towing, auto body repair, auto body paint, and truck Repairs. Our shop also offer tires sale, both new and used.Like your vehicle's engine, the transmission needs a routine scheduled maintenance program as well. We specialize in transmission maintenance and offer services to ensure the safe and extended life of your vehicle transmission. We offer great deals on a transmission flush, so please stop in and ask us about this important automotive service option.It is our goal to offer the best automotive services available at affordable prices to promptly get you back on the road with the least inconvenience.
Hours
Regular Hours
Services/Products
Transmissions, Engine Repair - All makes and models of cars, vans, Suv's, 18 Wheelers, Semi-tractor trailers, Semi-Trucks
Payment method
amex, visa, discover, mastercard, all major credit cards
Neighborhood
North Austin
Languages
English, Spanish
Categories
Auto Transmission, Air Conditioning Service & Repair, Auto Engine Rebuilding, Auto Repair & Service, Automobile Accessories, Automobile Air Conditioning Equipment, Automobile Parts & Supplies, Tire Dealers, Tire Recap, Retread & Repair
Other Information 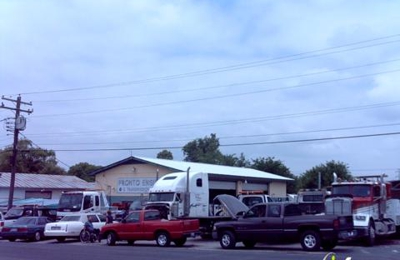 after only a week of living in austin, texas our transmission went out. so we called pronto transmission to come and pick it up. the car was at thomas mora's shop for more than two weeks when we finally decided to call and check on the status of the car. we called for three days and didn't get an answer, the phone rang and rang. finally we had to take a cab to his shop to check on the car in person. when we got to the shop the car was parked in the back and had not been worked on at all. thomas mora wrote on our invoice that the car would be completed by the 20th. so we took the cab back home and decided to give thomas mora until the 20th. on the 20th we called all day long and didn't get an answer, so again we took another cab to go get our car. our car was still unfinished, so because thomas mora breached the contract we decided to take the car and have it towed to another mechanic that was more reputable and would actually work on the vehicle. thomas mora became angry and defensive, he cussed and screamed at us and threatened to slap me, so we called the cops so they could help us sort out in the matter in a more civil manner. we ended up having to pay $670 for an unfinished car, $150 of that was to tow the car not even 7 miles down the road to their shop. we had our new more reputable mechanic make a detailed list of any damage that thomas mora inflicted on our vehicle, come to find out he stabbed our engine oil pan with a screwdriver and he stole our brake caliber, which is the mechanism that actually grabs the brakes and stops the vehicle(he wasn't even supposed to touch the brakes, the issue was with the transmission). so in conclusion, we ended up having to pay over $3000 in damages that thomas mora did when he vandalized our car. this man is a monster, crook, and a theif and i would have been better off leaving my car with a chop shop than with him. his wife apparently thought the whole issue was hillarious and apparently gets a thrill out of ruining other people's livelihood because she pulled out of the shabby business and pointed and laughed at us, as if to say "ha ha i got your money and i vandalized your car". i am sorry to say that there are businesses that operate under the false precepts of being a business when in actuality they are more like master planned criminal circus's. warning warning warning, if you value your life (he removed the brake caliber under the assumption that we would not have our car throughly checked and would ultimately crash it -which is attempted vehicular manslaughter) and you value your property do not take your car to this maniac!!!