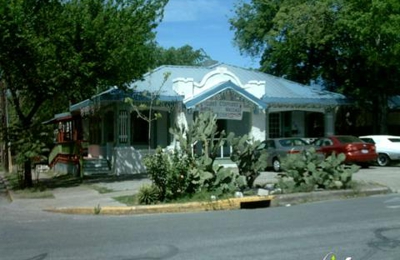 BBB Rating
A
BBB Rating and Accreditation information may be delayed up to a week.
Hours
Regular Hours
Extra Phones

My fiance and I stopped in on a whim to get some sugar before classes started up again. I have been very disappointed by cupcake places in the past- most of them pale in comparison to a Betty Crocker cake mix! However, Polkadot's is a dream come true. Almost everyone who complains about this place and rates it low is due to a bad customer service experience and NOT on how great the cupcakes are. We ordered Vanilla-Vanilla, Strawberry Shortcake, Red Velvet, Choc. Chip Cookie Dough and Chocolate Peanut Butter. The cake is moist and has the perfect tender texture. The chocolate ganache is incredible! The frosting is light, like whipped cream and not overly sweet. It is like satin and not gritty. My only complaint is that it is so close to campus and I don't need further temptation!

Polkadots is a cute little place tucked in a corner by Toy Joy. Pumpkin is my current favorite - it tastes like pumpkin pie in a cupcake form. They also do cakes for special occasions and you can see their work on flickr under polkadotsaustin.

HORRIBLE CUSTOMER SERVICE and inconsistant pricing information. I was quoted a maximum of $15 for a personal cake (The size of one cupcake around and 2 cupcakes tall) so I took time out of my day to go to the store to place the order whereupon i was told that the price was nearly 100% more! This is not my first interaction with Polkadots and I have to say that the other one was equally bad. They certainly aren't afraid to be rude to people either judging from my personal experience and reading some of the other reviews.

I've been ordering cupcakes for various work events for over a year now and have always been pleased. I love how close the location is to our office, which means that we've always picked them up so I can't comment on any deliveries.

The banana nutella and honey chai are by far my favorites... I guess the one con is that those flavors are sometimes sold out in the early evenings when I tend to make it to West Campus for personal indulgences.

It's unfortunate that other reviewers have had bad experiences, but I can honestly say that the dozen or so times that I've gone have all been pleasant and ended with rave reviews!

We usually don't respond to bad customer reviews but we just had to respond to the incorrect facts and misleading statements by the reviews by Bad Polkadots. From the review by Bad Polkadots, she makes it sound like we are adding an outrageous, enormous delivery charge for a delivery that is not far from our store. She neglects to mention that the delivery was not even in Austin, it was in Round Rock, 20 miles from our store. We gave her the total for the cupcakes only and told her the delivery charge would be $1 per mile(for deliveries outside Austin, we normally charge 10% more but we were giving her a break because she sounded like she was on a budget - she only ordered the vanilla flavor cupcakes despite the fact that the other flavors cost only $.25 more per cupcake).

So, when we called her to give her the final total, she started arguing with us about the delivery charge at which point, we decided that it would be better to not have her as our customer, we can't serve people who have such unrealistic expectations about price.
Let's break this down, if the location is 20 miles each way, the total mileage is 40 miles for going and coming back to the store. With average traffic, the delivery would have taken about an hour and 15 minutes. So if we took a very conservative estimate for cost of the usage of the car at $.30 per mile, it would come out to $12. That would leave $8 for 1 hour and 15 minutes of work for the driver. Does that sound like an outrageous charge? And that is using a very conservative estimate, $.40 or more would be the more correct estimate for the cost of the car.
So basically when we called to give her the final total, she wanted to order cupcakes that came out to $27.50 (plus decorations that we were basically giving to her at cost) delivered to an address 20 miles away for free.
Although we do lot of charitable work here at Polkadots, we are not a charity. Sorry.

HORRIBLE CUSTOMER SERVICE!!! Polkadots just cancelled my order for cupcakes to be delivered to my 3 year-old niece for her birthday. I called and placed the order from Houston yesterday and was trying to do something special for my niece in Austin. Polkadots took my order and quoted me a total. They knew the address in Austin and even confirmed a 2-hour window for delivery. Due to the location, I was told I had to order twice as many cupcakes (12 instead of the normal 6) to meet the delivery minimum. I agreed. Then, the manager called at noon the next day – the day of delivery and my niece’s birthday– and tried to add an enormous delivery charge (more than the cost of the cupcakes). When I questioned why I wasn't told about the delivery charge yesterday when the order was placed and when they took my credit card information, the manager cancelled my order...that's right, he cancelled, even after I told him my 3-year old niece was expecting them....HORRIBLE!!! NEVER DOING BUSINESS WITH THEM. So rude and so frustrating.

Polkadot cupcakes has the best icing of any cupcakes, the buttercream especially. My favorite is on Tuesday when they have the chocolate mint. They put the mint in the cupcake and the icing. They tend to run out though fairly quickly as it's a small shop.

The cupcakes were super yummy, except the strawberry icing tastes NOTHING like strawberry. It is bland all the way. I was hoping for a sweet burst of berry, but nada. Quite disappointing since the cupcakes themselves were moist. Course that could have been because we got there 20 minutes after they opened lol.

Dine-in cupcakes are served on a plate with a small fork and you can sit indoors or out! Bees were rampant so we ate indoors. Overall, they're yummy cupcakes as in the muffin...but the lack of flavor in the icing, like 2 parking spaces to choose from and being downtown won't bring us back.

I've heard nice things regarding the cupcakes, and was disappointed to not try them! My friend placed an order for a simple red velvet cake, and when I called 3 days in advance to request a change in icing flavor, the woman on the phone said it wasn't available and hung up on me! I had to call back and just cancel - not shy about taking my business elsewhere.