Check out our deals on tires and wheels!

General Info
With most reliable tire and wheel services around, the local Discount Tire store in Bee Cave, TX can help you make the right decisions for your vehicle.
Hours
Regular Hours
Extra Phones 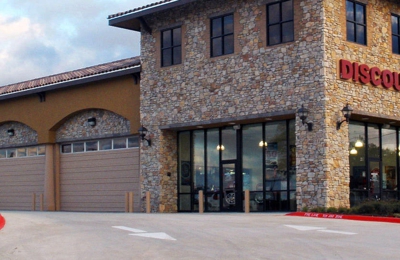 Gil was great, I had gone to a different Discount Tire previously and was told that my tire that kept going flat was safe to drive on just keep putting air in it. But as soon as I took it to Discount Tire on Ranch Rd, Gil came out to put air in my tire and told me that it was not safe to drive on and I need it fixed. So got it patched for free. Love Discount Tires. Very helpful and Gil was amazing, and very helpful.

I have purchased tires for the last 4 of my automobiles from Lakeway's Discount Tire. I have compared prices in the past & Discount Tire has always had the best prices in town. Over the last year, I had Discount Tire look at a potentially damaged tire & they advised that the damage was only superficial & that the tire did not need replacement. This weekend I stopped by to have them take care of a slow leak & found the tire damaged & unsafe to drive. They replaced it within an hour during a very busy time on Saturday, and it was all covered by the warranty I had purchased previously! Special thanks to Nick, who took very good care of me during my last visit.

Discount Tire has earned my future business and they are highly recommended.... great prices and incredible service!!

The management here are good people and they seem honest enough. The problem you need to look out for are the workers. We took our car to them a few months ago and changed two tires.

On our way out the mechanic who worked on our tires told us directly that there was a problem with one of the lugnuts and he couldn't put it back on. He played it off as if it wasn't a big deal and we left. Several months later we tried to get an inspection but they wouldn't pass us because we were missing a lugnut, which apparently is/was not as simple as just screwing back on as the Discount Tire mechanic had implied.

I immediately called and spoke to a manager and senior assistant at Discount Tire and explained the situation. They were very helpful and willing to replace the missing lugnut and repair any damage that had been done to tires for free, basically fixing what their employee had screwed up the first place.

What surprised me most was as soon as I started to tell management the story they knew exactly what happened..as if this situation had happened several times before.

Many of the workers at Discount Tires make mistakes and don't follow protocol and tell management they stripped or damaged a lugnut when replacing a customer's tires. The customer doesn't find out what a big deal this is until they go in for inspection and are not allowed to pass.

THIS ISN'T OKAY that management knows about this recurring problem with employees but doesn't do anything about it. I gave them 2 stars because as soon as management was notified they did right by us without a problem. Still, this should never have happened in the first place.