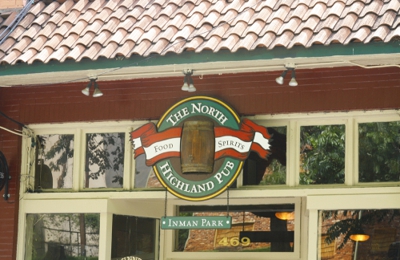 Quietly situated on N. Highland Avenue in Inman Park, North Highland Pub is the quintessential neighborhood watering hole. Thankfully devoid of frat boys and socialites, the crowd here is more chilled out and simply looking to relax with a drink. Next time you want to kick back, catch a game, or have a drink, stop by North Highland Pub.

Some people who choose to work in bars have never before had any power in their lives. When given the ability to say, not serve you, or tell you to leave the bar, or ignore your existence for a long period of time, they will do this just because they can. Basically its the same mentality as a homeowners association president. The bartender here is one of those people. He will try to wield every inkling of ""power"" he has as bartender. This baffles me because the whole point of being a bartender is to encourage people to attend your bar by being friendly. Having a d-bag bartender is a very bad business model, I don't know why the management chose to hire this fool. Anyway, you are warned customer.

I love the North highland Pub. Huge TVs for watching sports. Great during Hockey season if you're a Thrashers fan. Potter is one of the best bartenders ever and the wait staff is friendly and quick. The food is EXCEPTIONALLY good for pub food. I would go there everyday if I could afford it.

North Highland Pub has a lot going for it - surprisingly good food, great beer selection, stiff drinks, friendly patrons, really good jukebox, and it's away from the VaHi frat party between Ponce and Virginia. Here's the kicker though: The Monday through Thursday bartender is really good. The weekend bartender is one of the worst in history.

If you're looking for a good place during the week, I highly recommend parking on the street (there's a valet nearby, but don't use it) and grabbing a seat at the bar. It's real easy to spend 3 or 4 hours drinking there on a Tuesday night and walk away having dropped only $30 or so.

If you are looking for terrible service where the bartender ignores you, pours lousy drinks, acts like he's ticked off all of the time, and doesn't really want you to get a drink, much less have a good time then you should go there on a Friday or Saturday. That guy really is awful and we've tried to give him chance after chance but have given up on this place on the weekends, which is sad for us. Hey management - hope you read this and save your weekend business.

I have gone to this bar off and and on ever since about 2000 or so. When I was in grad school I often met up with friends there for things like birthdays or going away parties (with groups of maybe 10 or so) So after a few years I find myself returning to the Atlanta area and wanting to have a get together with my friends. I select my old haunt and invite about 15 people to meet me there. The night progresses and we are all having a good time, spending lots of money, drinking, talking, etc. My party took up most of the bar. At some point the arrogant hipster bartender/night manager decided that my brother wasn't tipping enough (he was tipping the standard amount - not including what he was going to leave at the end of the night - we calculated it out).

My brother was refused service and the only explanation given was the bartender throwing the tip down on the ground and saying ""I'm through serving you!"" and told my brother and his girlfriend, who were just sitting at the bar minding their own business, to leave. Can you imagine?

I took immediately cleared my tab, left no tip (because the way the bartender was acting) and left. None of my friends left tips either. I would rather eat out of a dumpster than spend one dime in that place. I am 30 years old and I have NEVER , EVER been kicked out of a bar for any reason. We were all being respectful and well behaved, no one in my party was rowdy drunk.

There are dozens of bars in that neighborhood with bartenders that won't get kick you out for not dropping a 50% tip just because the guy opened a beer bottle for you. I have heard from locals that the night manager there doesn't like people ""standing at the bar"", and the place is very small, so remember that next time you have more than one other person with you. Don't go there! Spend your money elsewhere, or better yet, get an expensive drink and leave a 10 cent tip for the night manager. I hope they go out of business.

Here I sit in Orlando, FL trying to decide on a good place to meet up w/some friends and drink too much and all I can think of (bar-wise) is North Highland in stupid old Atlanta. I used to live there and more than any other one thing in that city, I miss that damn bar. It sets the standard for Irish pubs in America and meets it every night you go. Also, I agree w/previous commentary that it is great for lunch or early evening situations. It is perfectly situated so that anyone who should know that it exists knows that it does (and that's lots of people), but those who should not, do not! I miss her.

Living in a city where most people are always looking to be seen in the right ""scene,"" it is a refreshing change to find a neighborhood pub that is really a neighborhood hang-out.
It doesn't matter when you go to NHP, you always receive attentive service, good drinks and great pub food.
The drink prices are right in line with most small establishments, but the food value is a total steal!
Great atmosphere also.
During the day, this is a perfect place for lunch. The bartender's name is J.B. ,and he will take great care of you.
If you happen in at night, Potter or Steve will make sure that you return!!!
Overall, a fantastic experience!
Try the fried grouper sandwich...awesome!

GREAT LITTLE PLACE TO HAVE A DRINK WITH FRIENDS OR GET A GOOD MEAL. THUMBS UP ALL THE WAY AROUND.