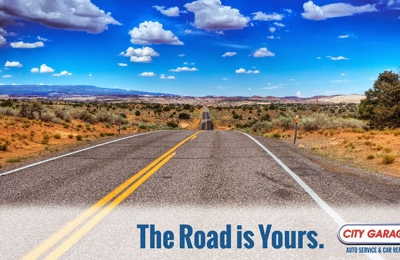 My daughters had a check engine light. We took the car there and was told they would look at it and find out what the problem was. A couple of hours later, we called and my daughter asked how much it was going to cost. We were told it would be 384.00. A few hours later, they called to tell us it was done. We went there and was told the bill was 536.00. My daughter asked why there was the difference and was told there was 110.00 to diagnose. We were not told that before they started looking at it and we were quoted 384.00 after asking how long it would take.

Dishonest!... Quoted me $1400 to replace front control arms and ball joints. They apparently don't want to show you the problem. I found a garage - Crawford and Bargas on Division. These guys explained to me that I DID NOT need ball joints and ensured me that my vehicle is safe to drive.

An alignment and tire rotation for$85 bucks took card of the problem. I saved over $1300 by avoiding City Garage!! Yay Crawford and Bargas, very honest people.

Thank you for the wonderful job you did to my car. Runs great!

Service is always top notch. The mechanics are great and explain everything very clearly so that you know exactly what is happening.

Everyone was great. An honest garage is hard to find. I was told here is what I need immediately.. and here is what I will likely need in the future. Then it is up to me to decide and I appreciated that.

We drive all the way from Hurst to use your service. Never been disappointed. Great attitude and customer services. Will always come back.

I've had service at City Garage several times. They are ALWAYS polite and helpful, and go out of their way to be accommodating to the customer.

Your garage always does a wonderful job taking care of my little Aveo and I wouldn't go anywhere else to have it fixed. You guys are great!!

I'm glad you guys are so close to me! You are a great and honest shop. You have always provided me with quality work for a fair price. I am definitely a customer for life.

It's always a pleasure doing business with City Garage. Dependable and quality repairs for a fair price. It's the only place I bring my car. Thank you.

I highly recommend them.  Very reasonable., we’ve had our cars serviced here for some time and it's always been a positive experience.

Always pleasant experience and have referred friends as often as possible. Keep up the good work!

Surprising service! I honestly haven't seen something like this in a very long time. I am not only impressed with the work, but they are obviously not in the business to rip people off.

Awesome repairs done daily, without the extra drama like at other places. It means a lot to have somewhere like that I can go to.

Reliable as can be with the best prices I have ever seen. I don't see any reason why I would go anywhere else if I get all of the help I need right here.

The way they make thing so simple is amazing. I have been coming here for a while and they always keep up with what they advertise.

I have had nothing but great service everytime I have come to City Garage Arlington. You can tell all the technicians here know exactly what they are doing and I can rest assure my trucks in good hands. I never leave the shop feeling like the service was over priced or the the techs scammed me in any way. I just felt it necessary to give credit where credits due and thank you guys for providing 5 star service. Keep up the good work!

This has been a very good, professional shop for as long as I can remember. I have always been treated with respect and the repairs have been long lasting. Just a quick thank you to you all.