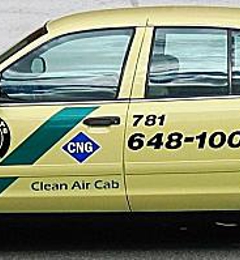 Great company, nice people, flat rate on the way in and out of Logan, they did not overcharge me the tunnel fee on the way into the airport. Pick up at Logan was perfect for my wife and son. I came back on seperate flight and that was also right on time, no problem using my credit cards both ways. Thank you Yellow Cab for the nice van.

I hate taxi's but Uber wont take me within town so I called Yellow Cab, nice ride, decent car, driver knew where he was going and they took my credit card with no problem. I asked about the airport and they are equal with uber. I might give them a shot when I go away, stay tuned.

This is the second time I've used this company and our first trip was good, so they were my first choice to call again - we're living out of state (but I grew up in Arlington) and called the night before for a cab to meet us at a relatives house as one of us was heading to a downtown hospital for surgery and needed to get there quickly - again, same reason as a few years back, but different driver. This time, the company had to be called twice as they were late (they didn't call me even though they had my number), and we missed the 6 AM deadline to be at the hospital on time. I called the hospital and they said as long as we were there in the next 45 minutes, surgery could still happen. The driver finally got to the house 19 minutes late. The van that we were riding in was not clean, there was a bottle in back of the driver's seat that kept rolling around and I noticed that there was used a tissue/napkin in the back when I got into the van. The driver then took us the scenic route to the hospital - literally - maybe he thought we were out of towners who didn't know our way around. When one of us questioned him, he said he was in charge and not to worry, even though we said we missed one deadline and it was imperative to be at the hospital no later than 6:30 AM or the surgery would be cancelled. When he finally dropped us off at the hospital (not at the door but across the street, and the one scheduled for surgery has mobility issues that the driver noticed when we first got into the van) the bill was very high, and we barely made it to the surgical desk to check in with 30 seconds to spare before the surgery would have been cancelled to another day. Will not use this company again.

These guys give a good ride ;-), the cab was nice and clean, drivers name was Tim, he helped with my 1ton bag of doom. I was 15 min late to come out and he was happy to take my credit card with no request for a tunnel charge and no extra fee for my bag. Thirty seven dollars from Arlington was a great deal, I love these guys. Thank you Yellow Cab and yes the number was 781-648-1000.

Yellow Cab is 781-648-1000, they do accept credit cards. I get the same flat rate to and from Logan every time and have never had a problem. Are they perfect NO, but they run in all kinds of weather and they are open any time of day or night to take me when and where I need to go.

First Late!!! Then I find out they don't accept credit card and i have no cash AND I asked them when ordered this ride if they do and the dispatcher said NO PROBLEM!!!! I was running late for my plane AND had to run into the Airport to get money out of ATM as my driver was "watching my luggage" as he conveniently offered... Great, there were 5 minutes of feeling like I am being treated as a thief who would run away if he did not make me leave my things in the car. Great Experience :((((( Never Again

This is a perfect taxi company. Flat rate to and from Logan, they take credit cards, and offer discounted rates. I have been picked up by several hybrid taxis as well; all the tires on all of their cars are filled with Nitrogen and have carbon offsets. Great company and I have seen they have a little league and soccer team so they support local causes. Nice drivers that speak English without having to press 1.