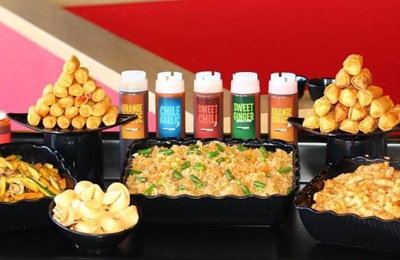 Great service! Has it ready when I call in.

Joe Gorman is the best ever.. He delivered our food to the our work it was hot and fresh and great.. I would ask for him again.. Great job Joe thank you for everything you have done . I order again from yall great food

food mostly tasted good was greasy, egg rolls were soggy. the main concern I have is that in the past when you order a full size entree you got more food than even 2 people can eat in one sitting. now the full size is barely enough for one, all for the same price. I get that they have started with the "traditional rice boxes" and that is fine but how can you charge the same price for less than half the food? I feel like I just got robbed. They just lost a customer. The driver was nice and the manager tried to have our next meal comped, but any future orders will still be the same size...

Great service and knowledgeable employees! Good size portions and the flavors were great! Generous meat portions of beef and chicken on my 2 meat combo plate and the vegetables were fresh but the egg rolls were especially good! Very clean pleasant atmosphere. What's not to like?

If you're craving some Japanese food in Amarillo, then you've come to the right place! Chop Chop Rice Co. is known for being an outstanding Japanese restaurant. They offer multiple other cuisines including Steakhouse, Japanese, Fast Food, Caterers, and Asian.

In comparison to other Japanese restaurants, Chop Chop Rice Co. is inexpensive.

As an Japanese restaurant, Chop Chop Rice Co. offers many common menu items you can find at other Japanese restaurants, as well as some unique surprises. Here in Amarillo, Chop Chop Rice Co. offers Combination Meals‍, Signature Entrees‍, Teriyaki Entrees, Salads, and Fried Rice Entrees and more. When it comes to some of the best menu items available, you can choose from:

If you would like to investigate further on pricing around all menu items, YP.com has provided you with the complete Amarillo Chop Chop Rice Co. menu.

Looking for other top Japanese restaurants in Amarillo? More popular places to try are Tsunami Japanese Steak House, Tokyo Japanese Steakhouse., or Outback Steakhouse. If you don't mind traveling a bit, we can also recommend more great places to eat Japanese food in nearby cities. Just give Maxey's Steakhouse in Childress, Panhandle Steaks in Canadian or K-Bob's Steak House in Dimmitt a try. Make sure to come back and leave a review at YP.com about what you liked and any recommendations for other users in our community!

Don't forget to tell your friends how your experience went at Chop Chop Rice Co. in Amarillo by leaving a review here at YP.com!