Email
Email Business
BBB Rating
A+
BBB Rating and Accreditation information may be delayed up to a week.
Extra Phones 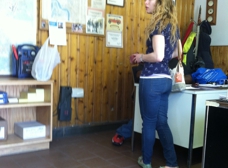 I had my car repaired at stadium auto body after running into an accent near Havarvard Sq, it made sense at that time because it was snowing (Feb of 2015 winter of a lifetime in Boston), and the tow truck was from stadium auto body.

They got the car ready on time (~3 weeks), however on arrival I found brand new scratches on the top of the car, I was told it wasn't covered in the estimate by the insurance adjuster okay makes sense, after further inspection an unopened bottle of scotch (25 years old) in the one of compartment went missing and so were the bundle of quarters left on the cup holder which was used as parking change.

After inquiring I was shown a paper printout pasted on the desk, "we do not take responsibility of any valuables in the car", makes sense again.

Bottom line is even-though the business has self made rules for everything, they will take every opportunity to rip off and steal from you.

The guy who manages the place is Freddy, very impolite and is a example of bad customer service.

I would not and highly suggest not taking the business to this place.

As a woman, dealing with automotive repairs is frustrating because many shops will underestimate your knowledge, try to take advantage of you, or treat you as a second class citizen - that is not the case here.

Stadium was incredible! They were polite, honest and very straight forward with what needed to be done, they didn't try to sell me any extra nonsense that I didn't need. The work was quick and very well done - less than a day turn around for a frame repair.

In the auto repair industry, you meet a lot of scum bags that will try to take your wallet for a ride- but I am very happy to report that Stadium is not like that. They gave excellent service for a very fair price and didn't try to trick me into anything I did not need done.

I had an appointment with the auto body to have my bumper looked at. I planned my day around the appt but when I arrived they ""had no record"" of it. They then made it seem as if I had the wrong auto body and started to be quite condescending. Overall the customer service was brutal and disrespectful.